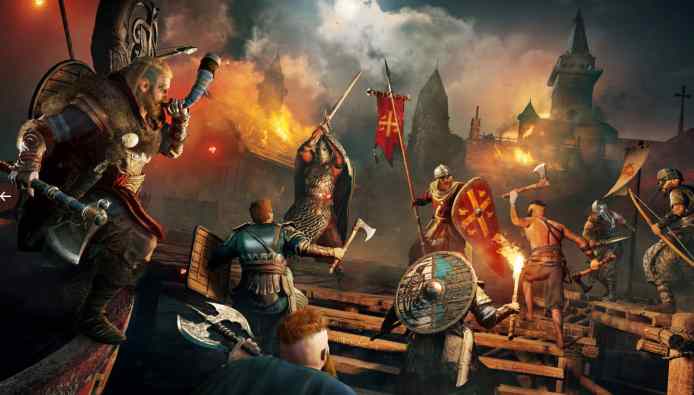 Assassin’s Creed Valhalla has been given a proper reveal trailer, giving us greater insight into the Viking world Ubisoft plans to release later this year. The four-minute cinematic trailer saves gameplay for another time, instead opting to focus on a greater look into the setting players will be visiting. Take a deep dive into Assassin’s Creed Valhalla’s Norse world in the trailer.

The trailer above is pretty visceral to say the least. Storms of fire arrows rain from above, soldiers are dispatched in gory fashion left and right, and Viking chants can be heard in the background of some of the most intense scenes. Of course, Ubisoft made sure to remind fans that this is an Assassin’s Creed game at the end of the day, as the Viking leader finishes off the toughest enemy with the franchise’s iconic hidden blade.

Assassin’s Creed Valhalla’s name saw its unveiling yesterday after Ubisoft and artist BossLogic held an eight-hour livestream event to reveal the game’s first official artwork. Though there have only been hints at mythological elements, the Norse gods seem to play a part of some kind in the game.

Assassin’s Creed Valhalla will be the series’s first big-budget entry since Assassin’s Creed Odyssey released in 2018. With PlayStation 5 and the Xbox Series X on the way, this latest game in the franchise will make the jump to next-generation consoles.