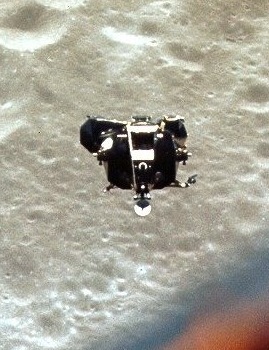 An amateur astronomer from the U.K. has put together a team dedicated to tracking down “Snoopy,” the lunar ascent module left behind by the Apollo 10 mission.

Before the Apollo 11 mission made history in 1969 by landing the first men on the moon, Apollo 10 blazed the trail by conducting a test run that included every step except actually landing on the moon. When its maneuvers were completed, the lunar ascent module – the funky, blocky thing astronauts rode up from the moon’s surface – was sent into orbit around the sun. As far as anybody knows, it’s still there.

And now amateur astronomer Nick Howe, with help from the Faulkes Telescope Project, the Space Exploration Engineering Corporation, the Remanzacco Observatory in Italy and schools across the U.K, wants to go looking for it. But have you ever come out of the mall and forgotten where you parked? This is going to be even worse.

“The key problem which we are taking on is a lack of solid orbital data since 1969,” Howe told Discovery News. “We’re expecting a search arc up to 135 million kilometers in size which is a huge amount of space to look at. We’re aware of the scale and magnitude of this challenge but to have the twin Faulkes scopes assist the hunt, along with schools, plus the fact that we’ll doubtless turn up many new finds such as comets and asteroids makes this a great science project.”

The obvious question is, why bother? Snoopy is the last surviving lunar ascent module to be sent into space but even if the team manages to track it down, it’s not like they can just call AAA and have it towed home, so what’s the point? Howe said that while the hunt for Snoopy is the headline-grabber, he hopes the search will turn up new comets and asteroids and “do some valuable science” as well.

“We have found close to 40 new asteroids on another pilot project run in conjunction with schools over the summer,” he explained. “The aim is mainly to get kids interested in astronomy and not just taking the same old picture of M27 with these two research grade scopes… [We] hope that we are able to do valuable science whilst aiming to make astronomy fun at the same time.”

“To paraphrase President Kennedy, we are trying these things ‘not because they are easy but because they are hard’,” added Faulkes Telescope Project Director Paul Roche. “This will be a real test for the hardware and the people involved.”