I was looking over Sega’s Genesis poll, in which site visitors decide the next game that gets put up on Xbox Live, and was reminded, upon seeing Streets of Rage and Golden Axe, of the Brawler. I can remember playing them as a kid, but I’ve never really thought about them. Like, for instance, why are they kind of frozen in time? You get the occasional update, but Sega’s Genesis poll is basically a list of IP that was pretty much ignored after that system disappeared. It’s no surprise that Streets of Rage and Golden Axe take up two of the six slots. Naturally, I have a couple of ideas why Brawlers are so tightly tied to a five year time period that lasted from 1987-1992.

The Brawler’s popularity in the US is linked with a pretty specific cultural moment. And when it passed, the Brawler’s glory days were over. I have to believe that, even though these games were coming from Japan, they were heavily influenced by American movies in the late 80’s and early 90’s. Think about it, the B-movie action heroes of the day were basically Brawlers. Jean-Claude Van Damme and Steven Seagal were the martial arts movie stars. They ran around cleaning up crack dens with karate in their slow-as-molasses fight scenes. Even a blockbuster like Lethal Weapon had two buddies, one of them a martial arts expert, running around kicking ass.

Brawlers also fit in nicely with Reagan era America. They were all about taking back the streets from hoods and gangs, saying no to drugs and rescuing babes in mini skirts. Renegade, Bad Dudes, Double Dragon, Final Fight, Streets of Rage, etc. – they were all based on that premise. There were a few exceptions, Golden Axe the most notable of these, but for the most part it was all about going into the inner city and bringing them a healthy dose of Reagan era justice.

And then there’s the fashion and the hair. A lot of other videogames had characters that you could take to any era pretty easily, like MegaMan and Mario, but Brawlers were frequently rooted in the here and now. I mean just look at Streets of Rage and Double Dragon – shining examples of late 80’s/ early 90’s fashion. Streets of Rage featured a guy in jeans and a t-shirt wearing a headband, a female character in a red mini skirt and a kid who kicked ass in rollerblades. The Lee brothers of Double Dragon fame even had mullets. Sure you could update all these guys, but their real world street wear was iconic. You don’t just take somebody out of their jean jacket and t-shirt and put them in SWAT gear, which is what would likely happen in an update. 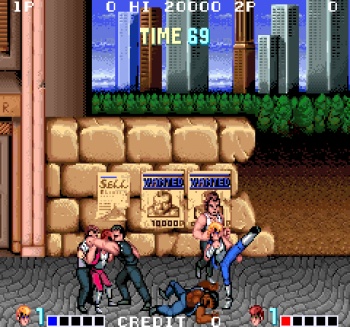 Those were good times for the brawler, 1987 to 1992. Then it all kind of petered out. I think this is basically a direct result of Street Fighter II coming out. Head to head play was way more intense than quarter pumping your way through level after level of cocaine dealers dressed as ninjas. Also, by the end of the whole process, you and your friend having burnt all your snack money before the movie, you still wanted more. Okay Guy was pretty cool in Final Fight, but the man wears a freaking gi, can’t he do more than two special moves? Street Fighter II was the answer to and the end of the reign of the Brawler.

But it’s also interesting that the golden age of the Brawler ended the same year as the LA Riots and the same year that Clinton was elected into office. I’m not saying those things directly influenced Japanese developers, but rather that 1992 was definitely the end of the era that produced the great Brawlers. I think it’s almost a coincidence, but I also think people’s tastes were changing. After five years of depressing urban portrayals, people were ready for something new. In regards to movies, obviously 1992 was not the day Van Damme or Seagal quit acting, (nor is 2009 so far) but political thrillers and serial killers were quickly becoming the new focus of both A and B list movies. Drug dealers and, sadly, Ninjas were out.

The brawler lives on, but it’s not even close to the same. Castle Crashers is pretty faithful to the whole Golden Axe legacy, but most examples of beating down the hordes are confined to action adventure games now. Games like God of War, Ninja Gaiden, and Devil May Cry, whose combo systems alone would make Guy and Mike Haggar’s heads explode with envy. Even the throwbacks, like MadWorld, are more about the hyperbole than taking it back to the streets. Why use a metal pipe or broken beer bottle, when you can use a chainsaw instead?

The Brawler as we knew it probably isn’t coming back in any meaningful way. Ex-Clover employees will have some crazy take on it from time to time, but otherwise I’m not holding my breath. This is one of those times when it’s best to just enjoy Double Dragon for what it was on Xbox Live: bouffants, broken beer bottles and all.

Tom Endo likes to occasionally do the Colossus power up yell from the X-men arcade brawler. Hraaaaaaahhhhh!