On November 16th, 2008 the music video suffered the final ignominious blow in its slow decline. That Sunday was the final airing of TRL, MTV’s last serious commitment to the music video. Snobs will claim the music video died the around the time Spike Jonze and Michel Gondry started making movies instead of videos, but only when TRL disappeared was the music video truly put out to pasture in late nights and VH1 Classic. For those in my generation, and to an even greater extent for the previous generation, this is a big loss. Once, music videos defined a band’s aesthetic and reinforced the artists’ intentions behind their songs. Without that we are stuck with tabloids photos and thirty second video clips.

Fortunately, I think videogames are the rising medium here to fill that gap. Guitar Hero and Rockband aren’t the solution I’m thinking of either. The evolution of the music video is in short, visually interesting games that don’t require much of the player. Games like Petri Purho’s latest Post I.T. Shooter. What struck me as I played this game wasn’t the game, but the music by Martinibomb, which is undeniably funky. Adding to the song’s funk is the game’s stop motion post-it note graphics, which you really have to see to understand. To put it another way, imagine playing a small portion of Peter Gabriel’s “Sledgehammer” video.

The game is a bare bones shooter, involving little more than your spaceman shooting a single Space Invader inspired alien at a time. Naturally there isn’t much of a challenge, but it’s appropriate because the game is just an excuse to tap your fingers to the beat while watching some interesting visuals. By the time I had finished playing, and I don’t think I even got to the end since I quit when the song looped to the beginning, I was left with a new appreciation for Martinibomb’s song “The Love God” and post-it notes. I doubt, if I hear that song again, that I’ll be able to listen to it without remembering the visuals in that game, in the same way I can’t hear the U2 song “Where the Streets Have No Name” and not think of them on a rooftop.

The music video videogame is an evolution. As my co-worker Jordan Deam pointed out, “These bands build really elaborate aesthetics around their music, but they just sit there.” Videogames are the next step in allowing music artists to converge with visual artists and provide an experience that’s more than just aural. With videogames, a band’s vision and their song’s intention can now be interactive.

The key in these inevitable future collaborations is simplicity of gameplay and ease of accessibility. Guitar Hero and Rockband are about simulating the challenge of playing an actual instrument and not about being a companion piece to the song. The point of the music video videogame is primarily to experience the song along with some light gameplay that complements the music. Letting my imagination run wild, I envisioned an extremely simple racing game with stylized illustrative graphics pumping along to The Arcade Fire’s “No Cars Go”. Pop music also provides song structures for developers to work with: Does the game change at the bridge or the refrain? The game must also be easy to access. Downloadable games probably ask for too much from an audience that wants to experience three minutes of song and leave. The music video videogame will probably be browser based. 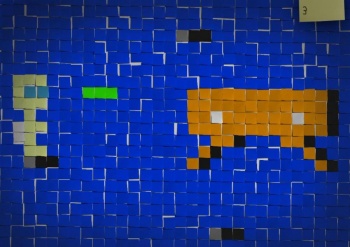 Musical artists have a chance for creative rebirth through videogames. The music video died because the form was co-opted into every aspect of pop culture. Music video directors brought their sensibilities to movies, advertising and television shows to such a degree that the music video was hardly original or indicative of youth culture anymore. But once, pioneers like Bruce Connor, an avant-garde film maker in his own right, were busy defining the form. In Connor’s case, he worked with an up and coming Devo to create a film for their song “Mongoloid” made up of found footage and montage.

I think musicians and indie game developers are nearly at those first pioneering steps right now. Purho is not alone. Several months ago, a crude platformer was released that had the players control a member of Daft Punk on a search to get their music back from the group Justice, who had stolen it. The music was reproduced as a chiptunes equivalent, but the attitude and the look were just right. The game also cleverly poked fun at Justice, a group that’s alternately praised and accused of being inspired by Daft Punk. There’s also the Lumines example, which paired puzzle gaming with full music videos in the background, and I can see that kind of game working occasionally. But the true pioneers, the Devos of the future, will build experiences from the ground up. It can only be a matter of time before a fully fledged music video videogame emerges.

The symbiotic relationship between visual art and music will persist. It has to. It’s impossible to imagine Bjork without the robot video for “All Is Full of Love” or The Beastie Boys without the ironic style of the Spike Jonze directed “Sabotage”. In this age of image, musical artists will continue to define themselves not only through their music, but through the work that surrounds them. Guitar Hero and Rockband are great, but they will likely never provide the image defining iconic “Thriller” video moment artists yearn for. With videogames designed specifically around musical artists, this opportunity still exists.