Rogue-ish charm, devil-may-care attitude, not averse to a bit of dirty work, but with a heart of pure gold. Yes, I am talking about Han Solo, Final Fantasy XII’s Balthier and Rex . If the Lone Ranger and Superman were our parents’ and grandparents’ heroes, Han Solo is most definitely ours. But I worry about Han Solo and his ilk. Has the character profile I so love stepped over the line into cliche territory?

Don’t get me wrong, the antihero will always have a lot of appeal. We pretty much knew, from the moment Harrison Ford sauntered his way into our hearts, that Luke was not going to be the true hero of the movie. People were ready for more than one dimensional goodness in their movies and Mr. Solo delivered.

Han Solo was a smuggler; a rascally space pirate. But I could appreciate that because I knew, in the back of my mind that whatever he was smuggling wasn’t intergalactic crack being fed to Ewok babies in some land of the lotus eaters nightmare scenario. He was also reluctant to do the right thing, but he always did, in the end, and I knew he could be counted on when it came time to help Luke destroy the Death Star.

However these tropes, once fresh and exciting, are starting to feel a bit stale to me as of late. At this point you can see the character type coming from a mile away. All the complications that make the antihero an appealing update to the spit-shined perfection of Superman and his ilk are becoming cliches in themselves. It could almost be a joke. You might be a Han Solo if: You have a cynical or world weary affect, walk with a swagger, indulge in funny but ultimately harmless acts of criminal behavior etc.

It’s only a matter of time before Han Solo and co. out stay their welcome. Luke Skywalker was kind of predictable, the Lone Ranger was definitely predictable and now, it’s a cold day in hell, because Han Solo is becoming predictable.

Yes, when a rakish character steps onto my screen movie, videogame or otherwise, I know what’s coming. Right now, I’m fine with that. It’s like cheering the hometown hero in his victory lap. But you only get one victory lap before the whole thing becomes a little annoying. It’s at that point that the smirks turn into mugging for the camera, the bad boy defiance kind of lame when I really start to break it down. 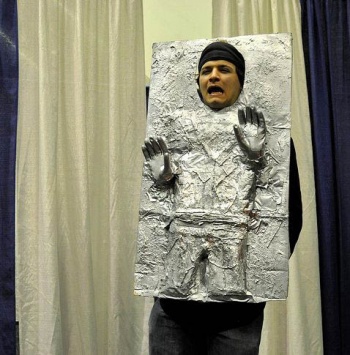 The elements for compelling characterizations are all there in Han Solo. He’s got a mysterious background, an essentially balanced moral center and he’s relatable to the everyman, no special hocus pocus force powers for him. So why am I not seeing more characters that, besides having that rogue charm, have a little back story as well?

Although my memory says otherwise, in truth, Han Solo played second fiddle to the Skywalker saga that dominated the Star Wars series, so there was no need to give him the expansive background that would’ve made him a more fully realized character. Many Han Solo inspired character are that way. They traditionally served as a foil to the more righteous upstanding hero. A Doc Holiday to Wyatt Earp, if you will.

Han Solo is stale but, in a way, his huge presence and influence in popular culture have made it possible for the lead characters to move beyond their cookie cutter do-good confines and into something more real. So, as protagonists increasingly make lewd jokes while discovering ground breaking revelations about themselves through flashbacks, they’ll be doing so with an eye towards Han Solo.

He may be old, but I won’t deny that Han Solo serves his function well, and I’ll always cheer for that type of character when they make their entrance. He was an alternative to the boring main characters, and while he may have become staid overtime, more stereotype than original article, I still get a kick out of the cocksure antics that define the type Han Solo first established. That people’s love for this enduring figure has resulted in Han Solo influencing an entire generation of leading characters is only an added bonus.

Tom Endo thinks Admiral Ackbar is the next great sidekick.