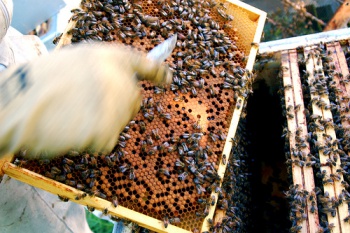 Scientists have finally identified what’s causing the mass die-off of bees in North America, and it’s worse than we thought.

Since 2006, bees in North America have been dying by the tens of millions from Colony Collapse Disorder; a phenomenon in which all the worker bees abruptly abandon the beehive, leaving only a queen and a few worker bees behind. Scientists have struggled to pinpoint a single cause of the disorder, identifying malnutrition, pesticides and habitat loss as potential suspects. However, scientists at the University of Maryland and the U.S. Department of Agriculture have found that CCD is caused by a combination of factors.

When the team collected pollen from beehives in seven major crops and measured the type and concentration of pesticides within the samples, what they found was a hodgepodge of chemicals. These chemicals, found in widely-use fungicides previously believed to be harmless to bees, increase a bee’s susceptibility to Nosema cerenae, a parasite that has been linked to CCD. Bees in colonies with high concentrations of those chemicals were three times as likely to be infected by Nosema.

It’s unclear what, if anything, can be done to stop this impending beepocalypse, but it needs to be fixed – and soon.