Four years ago I finally got around to playing the original Halo when I picked up the PC version in the bargain bin. I did not like it. But even though the game doesn’t work for me, the influence of this title is undeniable. This franchise basically established the console shooter genre and created a style and a set of conventions that are still shaping the way games are made today. Yes, it was GoldenEye that explored the frontier, but it was Halo that built the first city. So I thought I’d look back at this game and point out how amazing it is that things turned out the way they did.

But first, a history lesson. Some people have forgotten (or are too young to remember) that Halo began as a PC / Mac exclusive. Bungie was a longtime Mac developer (a rare breed) and its Marathon series was one of the few shooters available to Mac users in the early 90s. It was known for being a lot smarter and more story-driven than its cousins Doom and Quake. After Marathon, Bungie dabbled in RTS development for a few years before returning to form with Halo.

Halo was announced during the golden age of PC shooters. Quake and Unreal dominated the genre (If not in quality, then in attention and coverage.). We also had System Shock, Thief, and Half-Life. And we were pretty sure Duke Nukem Forever was just around the corner. In the midst of this bounty of quality titles we were getting the news that a new game was coming that might somehow blow them all away. The news surrounding Halo was tantalizing. It was going to have drive-able vehicles. Inverse kinematics that would let riders bounce around in the vehicle instead of acting like statues affixed to the vehicle’s frame. Squad-based AI that would take cover and flank instead of just charging into the player’s reticule. A mixture of indoor areas and outdoor landscapes instead of endless tunnels. Co-op play. And it would have a rich sci-fi setting that would rise above the “shoot all the aliens” narrative we’d been living on for the last decade or so. I realize these features are more or less expected these days, but at the time Bungie was offering us something that sounded almost too good to be true.

In June of 2000 it was announced that Microsoft had bought up Bungie, and the game went from being a PC exclusive to being Xbox exclusive. Then there was wailing and gnashing of teeth.

For Microsoft, this was a good move. They needed something big to launch their new platform, and Halo fit the bill perfectly. It was a shooter, it was a new IP, it had a talented development house behind it, and it had a large following of eager gamers awaiting its debut. 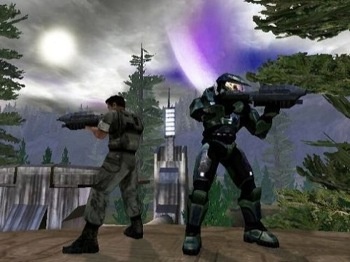 But what’s interesting to me is what Bungie didn’t do. They didn’t just charge forward and make a standard shooter. They adapted the game to suit the new hardware and – most importantly – the new controller.

Those old PC shooters were all about aiming. Being “good” at the game meant being able to snap your wrist and headshot a guy the moment he came into view. It meant circle-strafing: orbiting a foe while keeping their vulnerable bits in the center of the screen. Mice, being pointing devices, are really handy for this. There was never any reason to take cover in those games because hiding would just delay the inevitable. Gameplay was about diving head first into the sea of bullets and dogfighting your way out.

But if you watch someone play a console shooter you’ll see the game is less about precision aiming and more about precision timing. Instead of trying to line someone up with the stick, a player will get close with the stick and then run sideways, pulling the trigger during that split-second when the enemy’s head passes through the reticule. Instead of trying to mitigate this, Bungie embraced it and made the gameplay revolve around timing. You’ve got a shield that recharges at regular intervals. Foes that take cover and fire at intervals. Weapons with cooldowns. If you charge out into the open like the Doom Marine you’re going to get blasted back to the Game Over screen faster than you can say Larry Niven. Moving in and out of cover is an exercise in timing your shield, weapon, and enemy movement patterns. This is what Halo fans are talking about when they say the game is “more tactical.”

Halo was by no means perfect and it deserves a bit of the scorn the haters give it. The library section of the single-player mode was mercilessly tedious. And there a few dull sections where the game seemed to lose its way and became a 1996-style tunnel shooter. But I have to give the game credit for inventing a genre and fathering a dozen or more imitators. And those beach areas were pretty sweet by 2002 standards.

It would have been very, very easy for Bungie to simply stick with what they knew and what gamers thought they wanted and turn out a PC shooter that required you to use a thumbstick the way you use a mouse. But instead they made crucial alterations to game mechanics and ended up with a game that perfectly suited the intended controller. In doing so they made a new genre that has more or less eclipsed its predecessor. This was not an obvious move and was probably pretty daring to do so on top of all the other ambitious ideas they were reaching for.

This led to a lot of shooter fans rejecting it, simply because the game wasn’t what they expected or enjoyed. (I’m one of them.) And this break from expectations gave rise to the Halo hate flamewars that are still burning eight years later. But regardless of the hate: I still think Bungie made the right game for the right hardware at the right time.

Even after playing some of the newer console shooters I have to say I still don’t dig them. Although, I enjoyed Mass Effect 2, which is about 50% console shooter. Make of that what you will.