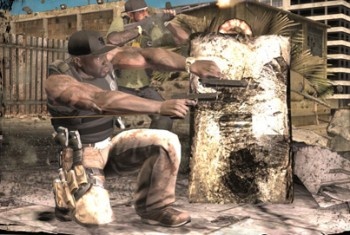 50 Cent’s increasingly dwindling reputation as a money making machine isn’t just the case when it comes to the music he sells: a look at the sales for his latest game, Blood on the Sand, show a major drop off from his previous videogame hits.

Apparently 50 Cent was lying the other day when he said that his videogame, 50 Cent: Blood on the Sand, was doing well enough that a sequel could be possible. Judging by the sales of the game, it appears that the rapper’s worth as a marketable brand is not only declining in the music industry, but in the games racket as well.

After glancing through some NPD sales numbers for Blood on the Sand and 50’s last game, Bulletproof, Kotaku‘s Stephen Totilo (see, I’m not the only one who takes this guy and his game seriously) discovered that Blood on the Sand, which came out this February, has only sold a 12th of what Bulletproof did in its first couple months of release. Apparently Blood on the Sand had only pushed a meager 56,000 copies between late February and April. Compare that to Bulletproof, which did 681,000 within its first couple months and eventually went on to become a million seller.

That’s all despite the fact that Blood on the Sand has averaged much better reviews and some degree of support from gamers who are shameless enough to enjoy a game about 50 Cent killing terrorists (yours truly included).

How to account for this massive drop-off in the viability of Curtis Jackson as a videogame brand? Kotaku suggests it could have something to do with the fact that Bulletproof had more of a gangsta rap setting being set in some mean urban streets, while Blood on the Sand takes place in some fictional not-Iraq. That could be it, or, more likely, it has to do with the fact that fewer people care about 50 Cent now than they did five years ago. I mean, name me a 50 Cent song from his last album off the top of your head.

Dante’s Inferno Goes For The Tried and True