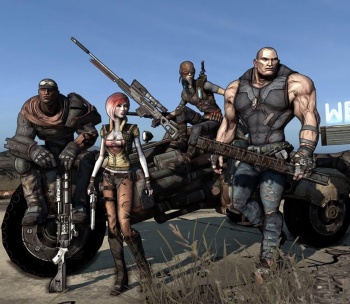 According to developer Gearbox, Borderlands‘ length and replay features are is going to keep you busy for a while.

Borderlands is not going to be a quick run through the desert if Mikey Neumann, Creative Director at Gearbox Software, is to be believed. Players will cap out at a level of 50, but will beat the game at around 31-35. It can then be replayed in a “New Game Plus” mode that is much harder, where all of the enemies’ levels are raised to 35-50, and rare spawns like the Brutes and the Badasses (which also drop the best loot) are much more common.

Neumann has played to level 50 twice, and says that it took him 100 hours the first time, and even more the second time because he was trying to complete all of the game’s missions. 100 hours is a huge amount of time to play any game, but if Borderlands can really deliver that type of lasting experience and remains fun throughout, it could end up becoming a classic. To my knowledge, nobody has pulled off the FPS-Diablo hybrid, which Borderlands appears to aspire to.

Hitting the cap of 50 could be a problem if gamers run out of stuff to do, but Neumann hinted that Gearbox plans to extend the life of Borderlands with DLC. DLC feels like a natural fit for a game like Borderlands, as new missions and areas wouldn’t seem too hard to just drop into the world for players to tackle. I hope Gearbox can make good on these claims, because Borderlands sounds like a dozer-load of fun. Expect to pick it up on October 20, 2009 for the Xbox 360 and PlayStation 3, and on October 26, 2009 for the recently slightly pushed back PC version.

First WiiWare Title to Support MotionPlus is Rage of the Gladiator