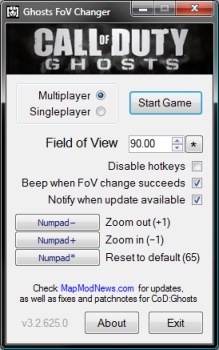 A tool to increase the field of view in the PC version of Call of Duty: Ghosts is now available and Infinity Ward says it’s okay if you want to use it.

You may have noticed that the FOV of the PC version of Call of Duty: Ghosts is fixed at 65, which is problematic for quite a number of people. It’s unusually narrow, for one thing, and some gamers find that eyestrain and motion sickness issues caused by first-person games can be alleviated by adjusting the FOV. A lot of games, including Treyarch’s Call of Duty titles, provide an FOV slider or, at the very least, a way to adjust it through the console; Ghosts does not.

It’s now possible to get around that limitation, however, with the unofficial and creatively-named Call of Duty: Ghosts FOV Changer tool, which allows the FOV to be adjusted up to 100 in both single and multiplayer games. A previously-released FOV changer that impacted only multiplayer games was taken down following a legal threat from Activision but this one is apparently cool, at least as far as Infinity Ward is concerned. There’s still a chance it could fall afoul of Valve Anti-Cheat, although there have been no reports of that happening.

Use at your own risk, in other words, but if you find the FOV 65 intolerable, this is the cure for what ails you. Pick it up at MapModNews.com.