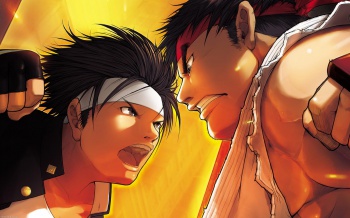 Capcom Vs SNK 2 is exactly what its title suggests: A 2D fighting game that pits Capcom’s most famous virtual pugilists against SNK’s crew of pixelated brawlers. You’ve got Ryu and Ken from Street Fighter, Iori Yagami from the King of Fighters franchise, Morrigan from Darkstalkers, and Haohmaru from Samurai Showdown throwing down alongside 43 other iconic fighting game figures. Even with the release of more recent mashup games, Capcom Vs SNK 2 remains a favorite among the hardcore fighting game set, both because it was one of the last classic 2D fighters to be created before Capcom opted to shift its efforts toward the third dimension, and because it’s just a generally fun fighter.

Point being: You should be excited by news that Capcom Vs SNK 2 will come available as a PlayStation Network download next week.

That news comes courtesy of the latest episode of the PlayStation Blogcast. Unfortunately the show makes no mention of the game’s price tag, nor any additional features it may have picked up in the leap from the PlayStation 2 to the PlayStation Network. We don’t expect the game to retail for more than $15, but it looks like we’ll have to wait a bit before Sony opts to divulge proper release details for this title.

Still, Capcom Vs SNK 2 arrives next week. That’s enough to get me hyped.