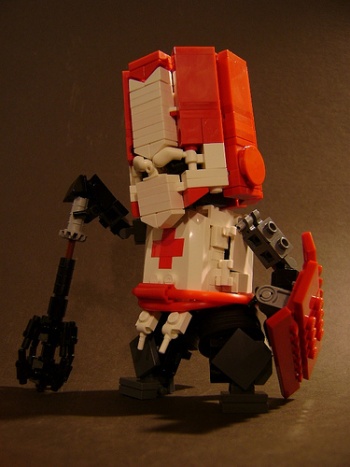 The Red Knight from hit Live Arcade title Castle Crashers has been recreated in LEGO.

They say – and by ‘they say’, I mean ‘I just made this up’ – that until you’ve been captured in LEGO, you’re nobody. Obviously that particularly piece of proverbial wisdom should be taken with a pinch of salt, as people who build things out of LEGO tend to have very specific interests.

Interests that include Xbox Live Arcade Titles apparently, as the red knight from Castle Crashers has been captured in all his LEGO-y glory.

Castle Crashers was one of the best selling Arcade titles of 2008, and won the XBLA Game of the Year award, as voted for by Xbox Live users, so it’s hardly surprising that it has some fans in the LEGO community.

The model was created by Daniel Rice, also known as Big X, and looks like it might just be articulated, although there is no way to know for sure.

While it’s tempting to suggest that someone might have just a little bit too much time on their hands, I’m definitely not going because this is pretty darn cool.

It’s a Kind of Magic