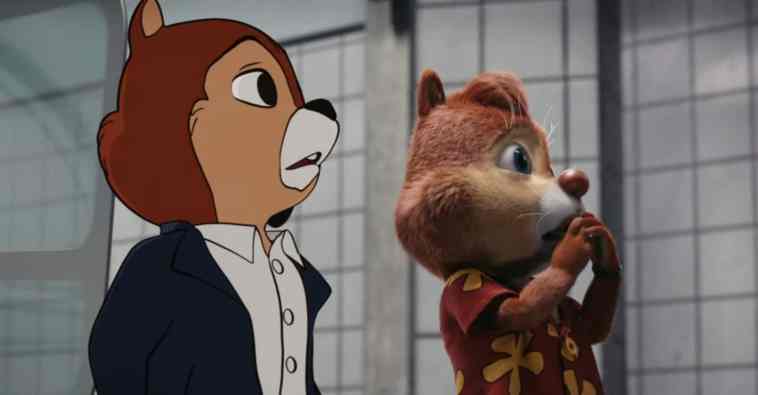 Ch-Ch-Ch-Chip n’ Dale are coming back, but the House of Mouse is doing something a bit different this time. Their “comeback” (not a reboot according to the new poster) isn’t for a new series but a new Disney+ movie that finds the pair of old friends at odds since the cancellation of Chip N’ Dale: Rescue Rangers in the ’80s and living pretty depressing lives in a world inhabited by both humans and cartoons (2D animated and CG). That is — until a case of disappearing toons pulls them back together. That’s right, as the first trailer shows, the Chip N’ Dale: Rescue Rangers movie is basically a new take on Who Framed Roger Rabbit?, and it looks fantastic.

Meta, nostalgia-filled films rebooting old franchises are a dime a dozen these days, but Chip N’ Dale: Rescue Rangers kind of looks like it’s going to work in its trailer. While its parts are pretty cliche — broken friends team up to solve a crime, taking on the persona of old TV roles, casting big-name actors to take on the roles, cameos from other Disney animations, toons and people living together — it appears to be coming together nicely so far. With John Mulaney as Chip and Andy Samberg as Dale, you’ve got two fantastic comedians working off a script from the guys who made the underrated Crazy Ex-Girlfriend. This looks like it could be more than the terrible nostalgia grab that Space Jam turned out to be.

The film also stars KiKi Layne, Will Arnett, Eric Bana, Flula Borg, Dennis Haysbert, Keegan-Michael Key, Tress MacNeille, Tim Robinson, Seth Rogen, J.K. Simmons, Chris Parnell, and what is sure to be a host of voice actors from across Disney’s animation history. The film is directed by Akiva Schaffer, who brought us Hot Rod and Popstar: Never Stop Never Stopping. Given everyone involved, it is clear that the film isn’t aimed just at the kid audience but particularly at those that watched the original series.

The Chip N’ Dale: Rescue Rangers movie will land on Disney+ on May 20.