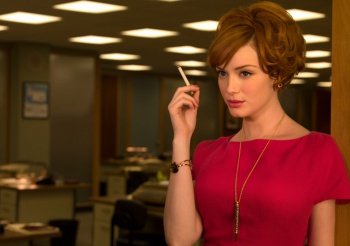 The Mad Men star says that if she does ever gets to play Wonder Woman, she’d want to stick as close to the comics as possible.

Director Nicolas Winding Refn, who is currently working with Hendricks on the movie Drive, has made no secret of his desire to see her in the role. Hendricks said that Winding Refn was an exceptional director, and if he ever asked her, she would say yes in heartbeat. She said she would want the movie to stay close as close to the original source material as possible. “I grew up with and am now married to a comic book fan, I think it’s important to be true to the original comic books,” she said. “I know that the fans love every detail and it’s very important to them.”

For his part, Winding Refn said that he hasn’t actually been offered the Wonder Woman project yet, but he’s hopeful that if his Logan’s Run remake goes well. “I would love to make Wonder Woman … but Warner Bros haven’t called yet,” he said “But I’m getting closer … I think someone said to me in a meeting that if I get Logan’s Run right, then I’ll get Wonder Woman.“

The last attempt to do something live-action with Wonder Woman amounted to very little, but Warner seems at least amenable to the idea of developing the property further. Hendricks might not be a massive box office name, but she’s no less well known than Henry Cavill, who will play Superman in the upcoming Man of Steel reboot. If Warner does the same thing with a Wonder Woman movie as it has with Man of Steel – casting really big name actors in supporting roles, while giving the leads to relatively lesser-known actors – there’s no reason that Hendricks couldn’t be Wonder Woman.