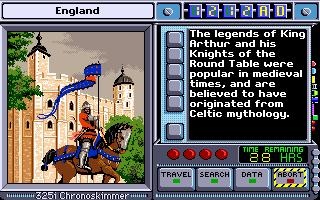 In his Press Released column this week, Sean Sands suggested that it was ok for kids’ entertainment to be just that – entertainment – and have little to no educational value. While I don’t claim to be an expert on raising children – my kids have four legs and fur, and once they learned not to poop on the carpet, their education was pretty much finished – I think he’s right. The problem is that most educational games are about as subtle as a brick to the forehead when it comes to imparting information, and though most folks like learning, they tend not to enjoy straight-up schooling. If you really want your game to smarten up your audience, you need to wrap its educational core in a nice fluffy blanket of fun – or maybe just a bright red trenchcoat.

We had a behemoth of a PC in our den when I was growing up. Ostensibly it was for me to use as a word processor for my school papers, but I think my dad really just wanted it because it was a nifty new gadget that went beep. It was huge, it was beige, and it used five-and-a quarter inch floppy disks to store your files. I thought it was cool, but I didn’t really grasp its power until my mom gave me a copy of Where in Time is Carmen Sandiego. She figured if she had to have this hulking heap of technology in her house, the least it could do was teach her kid something.

Where In Time was the latest in the series of games that featured a wily thief named Carmen Sandiego, who, with her bumbling team of criminal minions, stole artifacts from around the world. It was the player’s job, as an agent of the Acme Detective Agency, to track the thieves, gather enough evidence to secure a warrant, and finally to arrest them and return the purloined loot. At first, I was reluctant to so much as open the box. I mean, really, how much fun could a game that was clearly trying to teach me history – my least favorite subject – really be? So I kept playing Monkey Island and Zork and the other games I had acquired for the computer. The real games.

Eventually, my mother got tired of waiting for me to tackle Carmen of my own volition and directed the full force of her Guilt Beam at me. I sulkily put away the fun stuff and dutifully fired up what I was sure would be an exercise in slow, dull gaming torture. I mean, it came with a mini-encyclopedia, for pete’s sake, it couldn’t possibly be entertaining.

Oh, but it was. I wasn’t being asked to memorize names and dates, I was following cunning thieves around the world in a time machine. This wasn’t history, it was detective work! I would arrive in a location mere moments, it seemed, after one of Carmen’s light-fingered crew had left it. Determining the thief’s new location required careful examination of the area for clues and potential witnesses. You could win the game though simple trial and error, following each possible avenue until you stumbled across the right one, but that was slow and clumsy. I was never going to catch Carmen Sandiego by stumbling around like a fool – she was far too crafty for that. So I questioned witnesses and I examined physical evidence, and I looked up information in my mini-encyclopedia. And I loved every single minute of it. 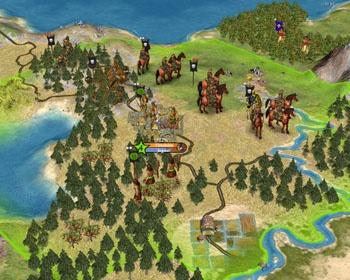 What Where in Time did that so many educational games do not is remember that a game has to be fun if you want anyone to actually play it – in other words, be a game first, educational second. Sure, I learned a bunch about the Aztecs and the Ming Dynasty and the Tower of London as I played, but that was incidental to the enjoyment I got from questioning witnesses, following clues, and bringing home the bad guy. The game’s educational impact was without question – I even started flipping through that mini-encyclopedia to see what interesting tidbits I might discover – but I never once felt like I was being taught.

This is where so many would-be educational games fall down. They so desperately want to have value as a teaching tool that they forget that videogames are meant to be entertainment. They can be many other things – educational, insightful, poignant, artistic – but at their heart, they must always remain a form of entertainment, or they become something else, something the audience might not necessarily want. The trick is to swath your message in enough fun – a spoonful of sugar, if you will – that players hardly notice that they’re taking away something more than just a high score.

Perhaps the answer to bridging the education/entertainment divide is to stop acting as if there is one. Virtually any game can be made at least somewhat educational, if handled appropriately. Want kids to learn the capitals of the world? Put out a special edition of Pokemon that has kids collecting Canberra and Madrid instead of Charmander and Mudkip. And I don’t mean a Pokemon-like game, I mean actual Pokemon. I know the popular theory is that kids will play anything – and to a certain extent, that’s true – but they can smell a knock-off a mile away and will not treat it kindly.

This concept needn’t be limited to videogames for the chillens, either. As Sid Meier’s Civilization series has taught us, plenty of adults are more than happy to have some learnin’ mixed in with their gaming, so long as the game is good. What if you actually had to learn some basic navigational techniques to travel from planet to planet in Mass Effect or from island to island in Wind Waker? Or had to master a few key chemistry concepts in order to mix your own potions in World of Warcraft? I’m not talking about memorizing the periodic table, just something along the lines of being able to know the difference between an acid and a base.

Not everyone is going to want to indulge in even that much brainwork when they game, however, but educational elements could be worked in a more subtle fashion, too. Perhaps the weapons in the next space marine saga could be named after great composers or players could collect famous works of art to unlock new characters or levels in a platformer. Players might even learn the names of bones as they break them in a fighting game.

Some games are already doing this, of course – I’d love it if you’d offer up some examples in the comments section – and any game that’s remotely realistic is likely to teach you something about something, but I think it would be great for such efforts to be expanded, especially in kid-friendly titles. Gaming is a habit that can start when we’re children, why not learning, too?

Susan Arendt thinks it would be a hoot if Oregon Trail was an unlockable extra in the next Need for Speed.