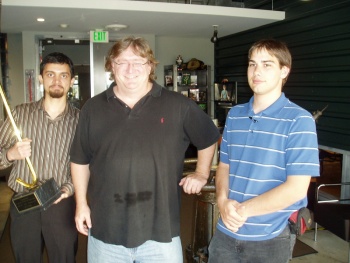 You can tell a boycott worked because nobody is happy with the results when it ends.

I was, and remain, relatively scornful of the organized Left 4 Dead 2 boycott that has drawn so much attention over the past few months; but as news is released that the boycott is officially coming to an amicable end, and with actual results to show for the efforts, I must admit it is one of the more effective efforts I’ve seen in online dissent. It seems like an incredibly unlikely thing, this boycott, in part because of the almost professional organization and visibility, but more so because the target, Valve Software, actually paid attention.

For the industry, Valve’s willingness to communicate with what have traditionally been seen as impotent, internet loudmouths, must be the equivalent of negotiating with terrorists. The videogame industry, which was once a peaceful domain where the line between developer and fan was an indistinct one, has recently become almost militant about public dissent for a seemingly ceaseless litany of sins. The idea that a major player would appear to cave even a little so publicly must be anathema.

On the flip side, I have little doubt that for many boycotters, the fact that the two main forces of the boycott have shut down after a pleasant little soirée with Gabe Newell will smack of corruption and collusion.

Welcome to the videogame equivalent of a labor union dispute.

Whether the boycott efforts actually affected release schedules for Left 4 Dead’s DLC or Valve’s internal pricing plans can be a point for later debate, but this ordeal has either laid a productive groundwork for future developer/fan interactions and dispute resolution or become the exception that proves the rule.

I have historically found boycotts in the videogame space laughable. Despite building a substantial part of my professional life in the periphery of the industry, I just can’t drag myself to a headspace where games rise to the importance of anything like a boycott. Even with a company like Activision, whose Snidely Whiplash hijinks are the moustache twisting acts of Saturday Morning Cartoon villainy, I’ll still throw my bucks at them when it seems appropriate.

I’m hard pressed to have a buying decision be an all-or-nothing enterprise. No matter how much of a goon I may think some over-payed CEO is being, ultimately there are a lot of highly talented and well deserving people actually doing work that deserves compensation and accolade. It’s too easy to vilify an organization.

But for the purposes of this discussion, let’s set aside the validity of the boycott itself. Let’s perhaps even set aside the difference between a private buying decision and a public temper tantrum, because what we have here is a case study in how both sides of the debate can begin to be more productive.

I have no idea if this desire to be more in touch with customers is at the heart of Valve’s decision to engage in dialogue, but the ends justifies the means.

What is equally remarkable to me, and it’s a tragedy that I’m about to say this, is that the boycott founders proved to be reasonable, rational people. I don’t know why I assume that stirring up an online protest over the ill-timed release of a sequel is the act of anarchist madness, but that’s the way I tend to skew. I am at fault here for prejudging the motivations of these gamers, and I know for a fact that professionals throughout the industry acted the same way.

This underlines the lack of mutual respect that seethes between gamers and game makers. Publishers and developers haven’t taken the complaints of their customers seriously perhaps because they do not take us seriously, and in return we have waged financial war with them. While I do not condone piracy, it’s not difficult to understand the underlying motivations of those who engage in it.

Toxic is perhaps a too kind way of putting the relationships that fester.

Is détente even possible? If so, Valve and the leaders of the L4D2 boycott have given us at least a vague outline of a roadmap. It would be nice to see more publishers and developers engage in active communication with the disenfranchised, and equally nice to see those who have been wronged recognize and retreat when their grievances are addressed.

Sean Sands is a video game writer, podcaster and co-founder of gamerswithjobs.com. He’s hoping to eventually negotiate peace in the console wars and be recognized by the Nobel Committee.