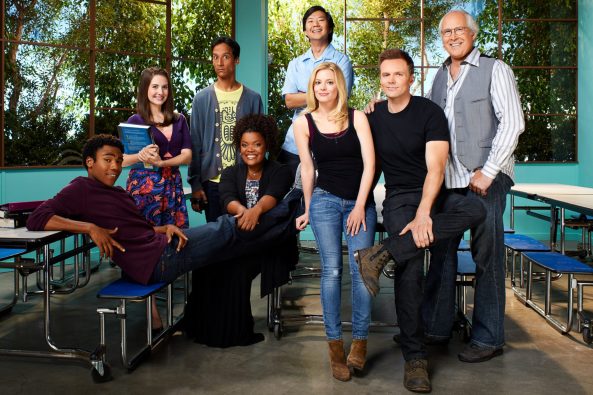 And that’s why everyone should be very excited about the news that Peacock has announced it’s making a series-concluding film for Community. Community: The Movie will come from the show’s creator Dan Harmon with much of the original cast returning, including Joel McHale, Danny Pudi, Alison Brie, Gillian Jacobs, Jim Rash, and Ken Jeong. That, of course, is not the entire cast as fans will note Donald Glover, Yvette Nicole Brown, and Chevy Chase are not listed. All three left the series at some point before, with Chase in particular essentially being pushed out for being an asshole. Harmon and Andrew Guest will write the film.

Community was a massive fan favorite when it ran for five seasons, starting in 2009, with pop culture references galore and an instantly classic cast of characters who just worked so well together. After its fifth season on NBC, it jumped to streaming on (checks notes) Yahoo, which thought it could be a streaming platform at one point in its downfall. It gained even more traction when it debuted on Netflix and people were able to binge it. Sadly, the sixth season was its last but did not tie up the show’s loose ends for the remaining characters. This new Community movie is set to do that after years of fans being teased about the film actually coming. Peacock was in heavy bidding for the film and finally won out, while also receiving non-exclusive streaming rights to the show as well.

“‘Six seasons and a movie’ started out as a cheeky line from Community’s early seasons and quickly ignited a passionate fan movement for this iconic, hilarious, and cool NBC comedy,” said Susan Rovner, Chairman, Entertainment Content, NBCUniversal Television, and Streaming. “We’re incredibly grateful that 15 years later, we are able to deliver fans this promised movie and can’t wait to get to work with Dan Harmon, Andrew Guest, Joel McHale, Sony, and our partners at UTV to continue this epic comedy for Peacock audiences.”

Many argue that the quality of the series dropped off in its later seasons and as cast departed, but the show was at such a high level that even a drop-off left you with a pretty damn good comedy. Hopefully, the film lives up to the years and years of anticipation.