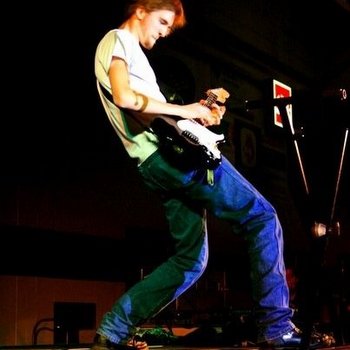 A short while ago we ran a story calling out Btenkink for his awesome ode to The Escapist, “Great Escape”. If you’re a fan of The Escapist and haven’t had a chance to hear the song yet, do yourself a favor and check it out!

In addition to being a huge fan of The Escapist and a sometime songwriter, you might be surprised to learn that in the physical world Btenkink is a 24 year old Vancouver resident working towards his Masters in Microbiology. He’s no Canadian native, though, having spent the previous 18 years of life growing up in Northern Nigeria. Writing tunes is, according to him, a great aide in the study of Secretion System Characterization, whatever that means! Besides playing games, studying science and performing music, he dabbles in a little Aquaponics system creation.

We had a chance to shine the Community Spotlight on him, and here’s how he answered:

In 2008 my girlfriend at the time sent me a link to a Zero Punctuation video of a game I was playing (Oblivion). In retrospect, that link was definitely the best thing I got out of that relationship! Well, one related link led to another and before I know it I had indeed broken out of this boring “real” life into a bold new online existence!

What did you originally want to be when you grew up?

Musician or doctor were both my goals until I realized that A) I cannot play any instrument unless it’s a MIDI patch in Reason or Cubase and B) I don’t have a spare 160,000$ to pay for medical school. Luckily in 4th year uni I answered the siren song of Post-Grad Research, and have been doing science ever since.

What’s your favorite current feature on The Escapist?

Yahtzee definitely has always had first pick to my attention, but lately Bob has been doubling down with two amazing shows (Escape to the Movies AND Big Picture). Add to this list everything done by the comic genius group that is LRR, the soul-melting audio beauty that is Rebecca Mayes and the face-melting awesomeness that is Miracle of Sound and a “favorite” becomes near-impossible to pick! All that said, only one feature goes beyond good performance to actually reach through the screen and engage everyday listeners like me. Only one has been so powerful as to make me stand up and dance around my apartment, laugh like an idiot, post like an obsessive child off their meds, and to inspire me to work up the courage to send in a musical tribute. That feature is: The Escapist Podcast. Always the best 90-ish minutes of my week.

If you had to eat only one food for the rest of your life, what would it be and why?

This is a loaded question for me because growing up in northern Nigeria everybody eats the same meal twice a day every day: Corn porridge and veggie soup. When New Year rolls around: porridge and soup. When Ramadan rolls around: porridge and soup. Now that I’m in North America my palate is beholden to such a plethora of aromas and flavors that to limit it again would be torture. If I had to choose though, I’d go for McDonalds cheeseburgers. Fast Food is like heaven on earth; you don’t even know!

Getting to watch the “Hour of Love” from the Expo online plus the hilarious gangnam-style dance line are both close seconds, however my favorite moment is a bit odd:
About 3 years ago I had been doing a LOT of 4chan… and not the clean PG pages either. After a non-stop six week barrage of insomnia-driven uncensored lawless internet spectacle my brain had gone beyond fried. Then I got slapped with a warning for an inappropriate Escapist forum post I’d made. The contrast was enough for me to fully appreciate having a haven where you can duck out of the rest of the web when it gets to be too much. That was the moment The Escapist became a balancing force in my online life.

Movie watching is a relatively new thing for me having lived in Africa from age 2 to 18. A recent Netflix subscription has helped offset that, but to be honest the best instant portal to understanding North American culture has been every Simpsons, Family Guy and South Park episode I can lay my hands on. South Park‘s “Bigger, Stronger and Uncut” takes it to the next level by weaving satire, catchy music, and terrible animation all into one tantalizingly awful package. Nothing is paradoxically better and worse at the same time than having “Kyle’s Mom is a Stupid Bitch” stuck in your head at work.

What is your favorite color?

I love that blueish green where it’s right on that line between blue-green and green-blue. It’s so much fun pointing to it and saying “That’s Blue!” just to see who will counter with “No that’s Green!”

As I mentioned above, music is a great study aide. One thing I do for the classes I take/teach is make music videos from the class notes. Here’s a link to my most recent one done for third-year Microbiology:

I’ve done others for zoology, marine biology, biochemistry, and organic chemistry. They are all on a playlist on my youtube channel: www.youtube.com/btenkink

Also, having spent 16 year in Nigeria I speak the local language Hausa fluently (one of over 400 languages spoken in that country… most useless foreign language to know outside of northern Nigeria). Every now and again I’ll do a song in Hausa. The last one I wrote was about the coming of the rainy season:

“Ruwan Sama” is Hausa for “rain”, literally translated it’s “water from heaven”.
For me music as well as gaming will always serve as a balance to the stresses of needing to earn a paycheck. I have a ton of respect for people like Gavin Dunne who can do music full-time or Susan Arendt who can spin a career from gaming, however once the de-stressor becomes the stressor for me this is when life becomes un-livable. To that end I hope to game and make music till I die, thus enjoying its power to balance and enrich an otherwise hectic Western lifestyle.

Thanks a bunch Escapist Community for your support and for making The Escapist uniquely awesome!