This article contains significant spoilers for Spec Ops: The Line .

For years I have reflexively closed my mind to the question of whether or not playing violent videogames can have negative effects on the player. I’ve told myself it was ridiculous, that videogames are fantasy and the psychological effects of violence are a real-world phenomena. The truth is I have a personal motivation for dismissing these ideas without first considering them. I’ve devoured violent videogames like candy since I got my first taste of Doom in 1993 and have specifically been hooked on military shooters ever since the original Medal of Honor series. When someone talks about the potential effects of playing violent videogames I’m the person they’re thinking about, so I’ve never wanted to take the idea seriously. Spec Ops: The Line has finally convinced me to do so.

Spec Ops is the story of Captain Martin Walker and his mission to make contact with Colonel John Konrad and the 33rd Battalion, United States Army who were lost in the city of Dubai while on assignment to help evacuate the city. It’s six months later, and the giant dust storm that enveloped Dubai has made communication with the outside world impossible, so Walker and his two Delta Force operators are sent in to investigate. They discover a city that has degenerated into a horrific war between the 33rd and the armed citizens of Dubai. Spec Ops tries to make us feel the insanity of the situation with passive techniques like disturbing graffiti on the walls, audio recordings that describe deranged interrogation techniques and the disintegrating minds of the soldiers of the 33rd Battalion, and a crazy journalist turned radio DJ who broadcasts throughout the city, but the player’s actions best convey the theme.

We see white phosphorus, one of the most horrific incendiary agents used by the United States military, dropped on insurgents. We witness their deaths and hear their screams as they’re burned alive. Not long afterward we have to fight our way to a heavily-guarded gate in the middle of the city. A company of the 33rd sits between us and the gate, and the only way through them is to use white phosphorus. When we investigate the results of our attack we discover the charred remains of dozens of civilians, including the gory, smoking corpses of a mother and the child she was cradling when they died. The soldiers we’ve killed had been keeping the civilians there for their protection.

A CIA agent named Riggs orchestrates a raid to steal Dubai’s water supply and thus undercut the power of Colonel Konrad. When the raid gets botched Riggs winds up trapped beneath a burning tanker truck, and he tells us that the purpose of the raid was actually to make sure no one in the city survived to tell the tale of the atrocities committed by Konrad and the 33rd. Riggs asks us to shoot him rather than let him burn to death.
Towards the end of the game a member of the Delta squad, Sergeant Lugo, is captured by a crowd of angry Dubai residents. We fight through members of the 33rd to get to Lugo but he’s already been hanged. Walker and his remaining companion, Lieutenant Adams, manage to get Lugo down but it’s too late to revive him. In the moment that follows, the player is tempted to avenge Lugo’s death by opening fire on the crowd of civilians. If we try to walk through them, they just push us back.

When I found the dead civilians after dropping the white phosphorus I was mostly pissed off at the idiots of the 33rd who kept the civilians there when they knew I was coming. I let Riggs burn and felt good about it, and damned straight I shot those civilians when they hung Lugo because fuck them, they had just hung my squadmate. I could say that none of this was real, anyway, and that because I’ve been playing shooters for so long the idea that I see all of this as just another collection of pixels on a screen and thus feel none of the horror I’m probably supposed to feel makes sense, but consider the opening scene of Saving Private Ryan, the Invasion of Normandy. 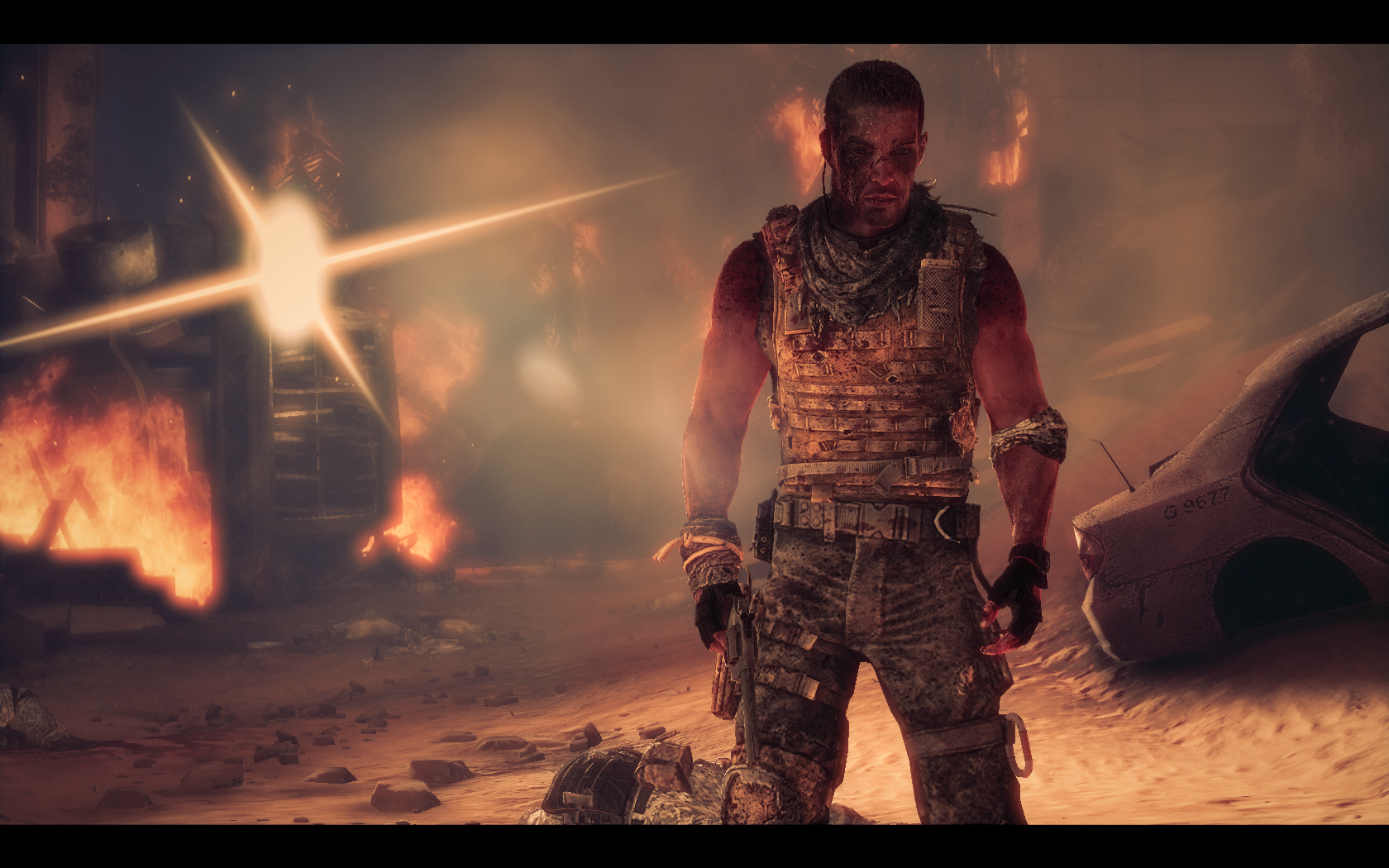 If you saw that in the theater it was probably one of the most horrific things you’d ever seen on a movie screen and heard over a theater sound system. The cacophony of noise hammered at you while men exploded and picked their arms up off the beach and screamed and died. The opening of Saving Private Ryan is no more real than a videogame. It’s based on a real-life event, and if you know this it carries a ton of emotional weight, but even if someone wasn’t aware of the historical nature of the subject matter, the power of that scene ought to remain, anyway. It’s a brutal, if dramatic, presentation of the horrors of war.

Now imagine someone in the audience who really wasn’t aware of the historical nature of the scene, maybe a teenager who hadn’t paid attention in history class. All they know is that they’re going to see a war movie. They’re laughing at the insane special effects, turning to their friends and saying “Damn! Lookit that dude with his arms blown off! That’s crazy!” and just watching the movie as if it were any other source of entertainment. We might look sideways at that teenager and think they were a little off because clearly the scene is horrific and they’re having way too much fun watching it.

Modern Warfare 2’s No Russian mission forces us to observe the slaughter of civilians at an airport but doesn’t force us to partake. I partook. I turned the mission into a sport, seeing how many people I could kill or trying to beat the AI-controlled terrorists to the punch. I even walked over to wounded, still-moving civilians and shot them in the head to up my kill count. My wife was horrified. I thought it was funny. And I’m only now willing to admit just how fucked up that was because I’ve looked at my decisions in Spec Ops and realized that it’s just as fucked up that I still don’t feel any remorse for what I did in that game, as well, and I need to know why.

I think the answer is that if I allow this state of affairs to worry me I’ll be spending my time in military shooters noticing the violence and the gore and thinking, “Oh, my God this is awful,” instead of paying attention to the job I’m supposed to be doing. I don’t play military shooters on Normal because I can shrug off damage and ignore my ammo counts and blow off taking cover and playing smart. I start on Hard or Veteran because I’ve been playing these games for years and I want to keep pushing my skills. That’s the fun of it, engrossing myself in the kinesthetics and the skill challenge.

That also means that I don’t really register when I snipe a guy and his head blows apart like a ripe melon, and those graphics are getting chunkier and more realistic every year. I don’t really think about it when I drop explosives on a group of bad guys and their limbs go flying off and they scream as they burn to death. I barely notice when I slit the guy’s throat and the blood spurts out because I’m focused on the next corner, the next room, the next encounter, and making sure I play it cool and calculated and smart because I want to play it right. I want to get into that state of flow where I’m one with the game, and I want to stay there.

What Spec Ops: The Line asked me to do was question whether or not that’s okay, and it isn’t about coming up with an answer. It’s about not dismissing the question anymore, and being open to the possibility that maybe something is fucked up about all this. I don’t think having proof of real-life consequences is necessary to warrant taking the question of videogame violence seriously, but there’s one real-life consequence that I know I’ve suffered. I don’t think I’m capable of talking about this in an objective fashion anymore.

I may be able to temper my knee-jerk reaction to questions about whether videogame violence is problematic or not, but I may only be able to understand the “problem” at an intellectual level. I’m not sure if anything other than the most clearly offensive and inexcusable virtual violence could even make an impact on me anymore, and the fact that this doesn’t really worry me at all is precisely what I ought to find worrisome.