When I think about Max Payne 3 I think about a camera shot tracking tight on a cluster of sixteen or so shotgun pellets as they slowly fly towards some poor bastard who’s about to catch the round in the chest. I remember thinking, “I can’t believe this is about to happen” while I slowed down the action with the press of a button and then literally watched the poor bastard’s chest evaporate into a cloud of red and gore as I pumped shell after shell into him in slow motion.

Max Payne 3 might be the most violent videogame I’ve ever played. I’m shocked we never saw it as part of a Fox News anti-gaming tirade or in front of a Congressional committee on videogame violence. If you play it you will understand what I mean the first time you shoot a bad guy in the neck and see him collapse to his knees while blood spurts out of the gaping wound. The violence is brutal and unapologetic, yet it never felt inappropriate, and I realized why during a viewing of RoboCop.

When Peter Weller’s character, police officer Alex Murphy, gets caught by Clarence Boddicker and his gang in the factory towards the beginning of the film, Boddicker blows off Murphy’s right hand with a shotgun blast, and the rest of Boddicker’s gang unloads shotgun shell after shotgun shell into Murphy. Murphy’s body armor gets shredded to pieces but keeps him alive, and Boddicker finally puts Murphy down with a pistol shot to the head. The murder of Alex Murphy ranks as one of the most violent scenes I’ve ever seen in a movie. It’s a crucifixion. It pulls no punches and makes no effort to disguise itself as anything other than the disgusting display of violence it is. It’s also entirely necessary for the story. Murphy’s will to live is what keeps him going even after he realizes later in the movie that he’s been transformed into a cyborg monstrosity.

There’s an honesty about the violence in RoboCop that I’ve always appreciated. When the ED-209 enforcement droid malfunctions and guns down an executive in the OCP boardroom very early in the film, that poor bastard gets ripped to pieces with magenta, gaping wounds accompanied by staccato thuds. I was thirteen years old when I saw that scene for the first time. I’d never seen anything like it in a movie before. RoboCop treated me like an adult who could handle something traumatic.

The violence in Max Payne 3 also feels very honest. It treats us like adults by pulling no punches. It’s grim and blunt and grueling and intimate. I challenge you to play the game on Hard and not feel some sense of exhaustion by the time you get to the fourteenth and final chapter, not only because the game is taxing skill-wise but because you’ve been exposed to so many brutal killings along the way. Witnessing violence ought to do that to a person. By the time I reached the end of Max Payne 3 I wasn’t taking advantage of the ability to shoot my final victims over and over again in slow motion because I’d had enough. It wasn’t attractive anymore, and maybe that was the point.

We talk a lot about violence in videogames but we usually sidestep the issue of what that violence might be doing to us while we play these games. Max Payne 3 might be the beginning of an answer to that question. My mood was very somber at the end. The game was still fun, but I also couldn’t wait for it to be over because I was psychologically exhausted. That sounds about right from what little I know of real world exposure to extreme violence. That doesn’t mean videogames are every bit the evil influence that conservatives or well-meaning bleeding hearts would like to paint them as, but a game like Max Payne 3 does suggest videogames might be capable of addressing the real-world issues of violence we live with, and also addresses the question of whether we ever want our videogames to truly address those issues at all. 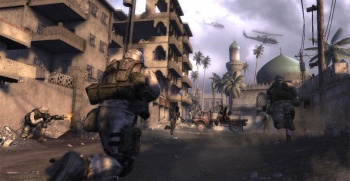 When Konami dropped their plans to publish Six Days in Fallujah, I was incensed. After years of military shooters that were nothing but the grossest fictions of military adventurism and utterly devoid of any discussion of the real consequences of war, finally a videogame was going to approach the subject matter with a documentary eye. The soldiers of Third Battalion, First Marines were the men who asked Atomic Games to develop Six Days in Fallujah so that their stories could be told. Now the game was effectively dead in the water because a small number of military families had expressed their displeasure at the subject matter?

Brilliant videogames make us reflect on larger issues and maybe rethink our positions.

Some people might argue that the way we show respect for soldiers is to present the horror they face to everyone else, to make us appreciate the sacrifice these men and women make. When I consider how awful the violence is in Max Payne 3, which is mostly an issue of small arms fire, and then consider the destruction military-grade weapons are capable of, I wonder whether the de-facto canceling of Six Days in Fallujah is as egregious an event as I’d originally felt if it was going to truly attempt to be realistic.

Even the best movies about Vietnam and World War II, with the most gruesome and brutal depictions of violence aren’t mostly about firefights and death. Do we think a videogame audience would put up with the same proportion of action-to-narrative that war movies usually present? Can you imagine an eight-hour campaign of some of the most brutal, horrific, psychologically-taxing violence we’ve ever seen in a videogame? Would any of us actually want to play that? Maybe the argument “Movies can tackle serious issues about war, so why can’t videogames?” doesn’t make as much sense as I thought it did. Maybe the difference in mediums, specifically the length of the experience and the pacing that each medium requires in order to be successful, really does make a tremendous difference here. And don’t these considerations make it sound extra ridiculous, perhaps even offensive, when we listen to publishers tell us that games like Medal of Honor are seeking to be realistic?

The best videogames are the ones that stick with us long after we’ve put them down and continue asking us questions. That’s been my experience with Max Payne 3. I think it’s easy to look past shooters as a bunch of meathead bro experiences we associate with foul-mouthed audiences on Xbox Live, but think about how everyone lost their minds over BioShock because it was dealing with real world issues and themes. I suggest to you that Max Payne 3 might be brilliant in precisely the same way, and the real world issues it alludes to and deals with are much more timely than anything discussed by BioShock.