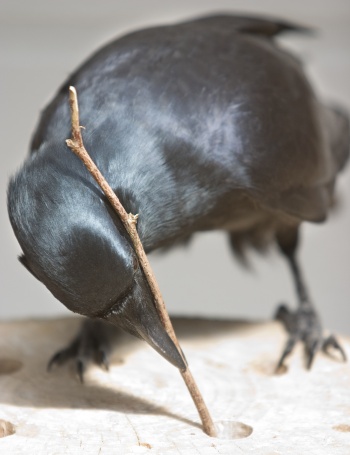 Crows have long been known to use tools in enclosed habitats, but scientists have now been observing advanced tool habits in the wild.

Crows: harbingers of doom; collectors of shiny things; effective tool users. If humanity were to be suddenly wiped from existence, crows are a good candidate for a clever species that could evolve to fill our niche. Not that crows would, of course. They’re too smart for that.

In particular, New Caledonian crows are extremely smart birds. Among the corvid family, New Caledonians are the most frequent tool-users, and have now been found to make advanced tools in the wild, away from the carefully constructed obstacle courses of labs and artificial habitats.

Christian Rutz, from the University of St. Andrews in the UK, and his team attached tiny “crow-cams” to the tail feathers of ten crow subjects, then released them back into the wild of New Caledonia, a collection of islands east of Australia.

“Why is it that New Caledonian crows use tools but other corvids don’t? I think the answer to that lies in looking at their time budgets and figuring out how important tool use is in their everyday lives – what kinds of prey sources they tackle with tools,” says Rutz.

The little cameras download to an SD card, and fall off after about a week of wear. At first, the recovered footage was disappointing and confusing. “Out of total observation time, only about 3% was spent making or using tools.” says Rutz, and fewer than half the subjects picked up a tool at all.

Mostly, the crows used their beaks for foraging, ripping the bark off of trees to find grubs. Inexplicably, the crows sometimes used sticks to remove the bark, despite their beaks being much better suited to the task.

Two moments in the footage, though, were cause for celebration for the team. They observed crows actually building a proper tool to suit their needs: something like a hook shape, made by snapping off one branch from a forked twig, but leaving a part of the main stem attached at the end. This tool is used to scoop out insects living too deep in holes for the crows to normally reach.

The behavior has been observed in a lab setting, but never recorded in the wild. “When we got that footage it was a proper high-five moment in the field camp,” says an excited Rutz.

What I am understanding from this is that, should crows decide to take us out, they could. We just need to keep paying them tribute with shiny metallic objects, and they’ll leave us in peace.

Any readers out there have any awesome “eerily clever crow” stories?

Scientists: Time-Travelling Quantum Computer Will Have Been Solving Everything

Star Wars Worth More Than Harry Potter, James Bond, And Some Nations