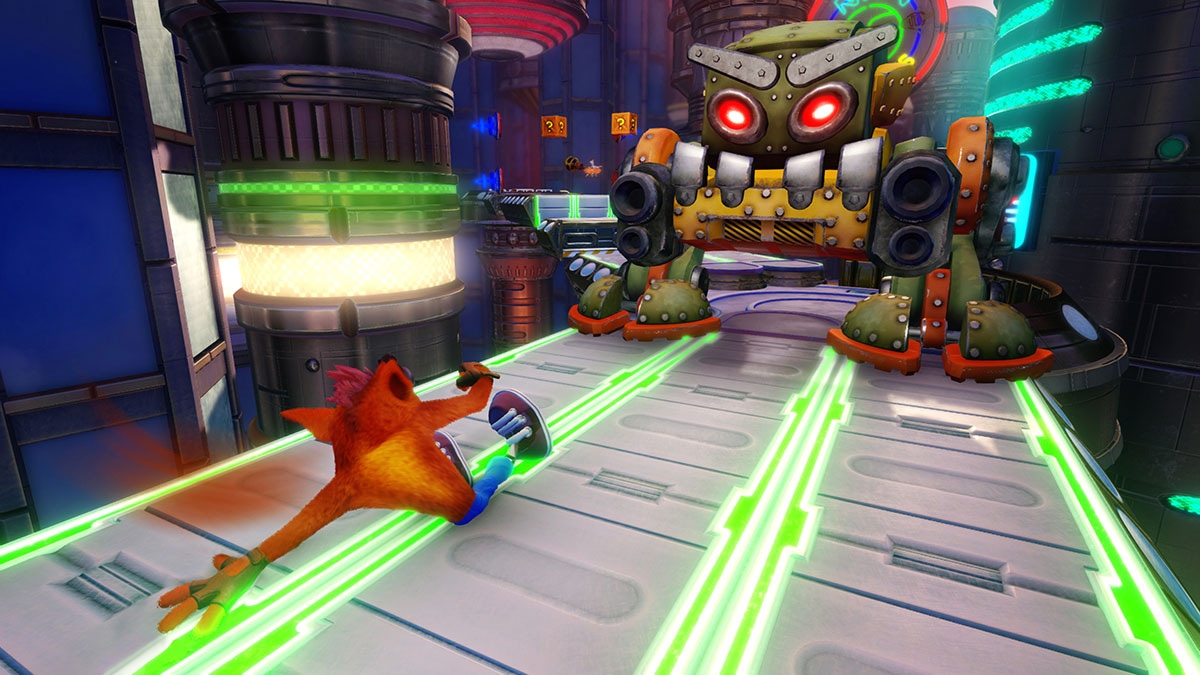 Crash Bandicoot 3: Warped introduces five more challenging boss battles to the N. Sane Trilogy. If you need a helping hand, we’ve got a few tips that just might help.

The boss fights in Crash 3 aren’t quite as difficult as Crash 1 or Crash 2. Most of these shouldn’t present too stiff a challenge to experienced players, but we still want to provide a handful of tips if you’re unsure what to do. We’ve all been there, stuck in a rut, getting killed by a boss and asking, “What am I supposed to do?” — here’s what you’re supposed to do to defeat all five bosses.

As an added bonus, each boss now unlocks a new ability for Crash Bandicoot to use in-game. You’ll gain double jumps, death tornado spins, speed shoes and bazooka blasters. By the end, you’ll be able to traverse stages with ease. It’s a very cool upgrade to the Crash formula.

Bosses are unlocked after finding all the Crystals in each Hub World. There are 5 bosses in Crash 3: Warped.

One of the easiest bosses in the entire N. Sane Trilogy, Tiny Tiger follows a familiar pattern. Like the other games, he jumps around the arena, attempting to squash Crash.

There are no death pits in this arena, though. All Crash has to do is run to avoid his jumps. Change directions, and wait for Tiny Tiger to slam his trident into the ground. While he’s stunned, spin-attack to damage him. He takes three hits to defeat.

After taking damage, Tiny Tiger will retreat and summon a swarm of angry lions! You can dodge them, but it’s much easier to simply plant Crash in one spot and spin-attack to defeat the lions as they come out of their cages.

Dingodile is a flame-throwing dingo/crocodile hybrid with an Australian accent and lots of crystals keeping him “safe” in the center of the boss arena.

This guy can actually be even easier than the previous fight. You can avoid his crystal shield entirely. Just use a slide-jump and spin-attack to glide over the crystals, get in close, and spin-attack Dingodile.

Three hits, and this guy is down for the count. You’ll earn the Double Jump ability for winning.

The N. Tropy fight is all about survival. He stands on the far side of a chasm — when he slams his staff down, platforms will appear. He’ll also summon walls of electricity, depending on the direction of his blast.

He’ll either fire a missile, send an arc of electricity to the left, right, or center. When it comes from the center, his arcs will land on both the left and right nodes.

As Crash, you just need to survive each round until N. Tropy summons enough platforms to reach him. Watch out for the red-flashing platforms, they’re about to disappear.

When N. Tropy is exhausted, you’ll only have a short amount of time before he recovers. Quickly jump across the platforms and land a hit, and you’ll win after three rounds.

N. Gin is back with an even bigger mech suit! The setup is similar to the Crash 2 fight — N. Gin is facing you with a massive mech, but Coco is piloting a spaceship this time around. You can move it left, right, up and down. There’s even a targeting reticule to help you aim at N. Gin’s weak points.

Coco’s spaceship has a health meter this time, and you can absorb a pretty good amount of hits. That makes this fight a lot less stressful. It’s okay if you’re hit a few times.

To get started, aim at the shoulder-mounted missile pods on the boss’s shoulders, and aim for the small yellow marker around the waist. Those all shoot green missiles — you can shoot those out of the sky before they hit Coco.

After destroying one weak point, N. Gin will begin using his laser chainguns. The chainguns take a few seconds to spin-up and begin shooting. Use that time to safely shoot them.

Coco gains an even more powerful cannon, and N. Gin unleashes a barrage of missiles and plasma. There’s no trick to this part of the battle, just use your armor reserves and blast all seven weakpoints.

There are two plasma blasters on the left and right — dodge the slow-moving projectiles and shoot the missiles from the four missile pods.

Complete the battle to unlock the Fruit Bazooka power.

It isn’t just a fight between Crash and Cortex, but the two masks are fighting too! They’ll spin around the arena, shooting lasers at each other. Use slide-jumps to give yourself extra airtime and (hopefully) avoid their beam as they unpredictably spin around.

You’ll also have to watch out for Cortex’s lasers. They’re slow moving, so just keep moving to avoid. Eventually, Cortex will drop mines and lower his forcefield. Spin-attack him into the hole in the center of the arena to damage him.

For Phase 2, the masks will spin in a deadly tornado. There’s no jumping over this, but it’s much smaller and doesn’t move too fast. Just stay far away. Avoid Cortex’s lasers, wait for him to scatter mines, jump over and spin-attack Cortex into the pit.

At Phase 3, the masks will clash in random spots on the arena. If you’re caught between the two masks, quickly slide-jump out of there! You have a second to escape even when the tornado begins to appear around Crash.

Otherwise, it’s all the same. Smack Cortex into the pit a final time to unlock the Speed Shoes.

And that covers all the bosses in the entire N. Sane Trilogy. Looking for help for one of the previous Crash games? Check out the link bank above for more details.