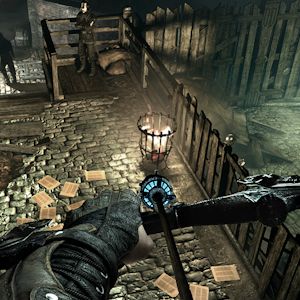 Last week Justin Clouse reviewed the new Thief Game. The consensus on this game is decidedly mixed. I think I liked the game better than Justin did, although I agree with the points he made. It’s a flawed, frustrating reboot that feels off.

One common element in everyone’s criticism is that they can’t stand the story. A lot of people are saying that the plot is dumb or boring or cliché. I’m going to ruffle some feathers by saying that I think the story is basically par for the course for the Thief series. Allowing for the fact that my nostalgia goggles probably aren’t calibrated, I’ll go out on a limb and say Thief 2014 might even be better in some ways than the previous games when it comes to story. (At least until the final act, where it feels like the cutscenes don’t fit together because of re-writes.)

I think the problem with this new game is not the story, it’s the presentation.

See, the series has always been about nonsense ancient prophecies, cryptic oracles, stock boogeymen, magical macguffins, and very arch characters, all forming a plot that drags the reluctant Garrett into a situation where he’ll save the city. In fact, Thief 2014 is basically a re-mix of elements from the previous three games:

Those are the major elements, but you can find plenty more if you look. The point is, this new Thief is nothing new. And I’m fine with that. The problem here isn’t that the story is bad, it’s that the story gets the spotlight. I talked about this a year ago. The developers are using a full-performance capture technology that’s expensive and time consuming. It means all of your performers have to get on a mo-cap stage and act out the scene together while the computer captures body movements, voice, and facial expression. It’s impressive when it works, but this is not a game that needed it.

I understand how this happened. Square Enix obviously has a cutting-edge mo-cap stage. (My guess is that it’s located at the Crystal Dynamics studio in San Francisco, since it’s easy to get actors around there. If this is true, it means the game was built in Montreal but the cinematics were shot in California. That probably didn’t help either.) It got a lot of use in the Tomb Raider reboot, and I’m guessing Square Enix is trying to get the most out of its big expensive facility by shoehorning Hollywood-wannabe cinematics into all its games going forward.

Remember that the original Thief used still images and actors in silhouette against hand-painted backgrounds to tell its story. The result was amazingly cheap to produce (especially by today’s standards) while also being striking and iconic. Nothing else looked quite like Thief. And 16 years later, those cutscenes have aged a lot better than a lot of other games that came out that same year. In fact, those Thief 1998 cutscenes look much better than this one from the third game, even though the latter is six years newer. 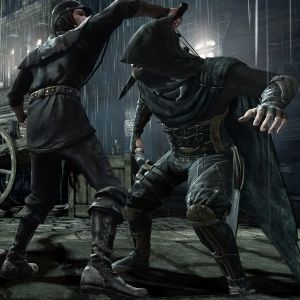 The plot of a Thief game is something that works as a series of moody three-minute animations that leave a lot of the details to the imagination. It doesn’t work as a movie with a full cast and a bunch of dialog. In the earlier games, we’d get a little cutscene once every few hours. They didn’t have a lot of dialog, and most of the events were hinted at. It was basically steampunk noir. It was about setting a mood, not making a movie. If you wanted to know the motivations of the side-characters, you could read about that stuff through in-game books or by eavesdropping on conversations. It rewards the curious and cautious, without ramming a bunch of exposition down your throat.

Now this reboot has characters where we can see their faces and they’re explaining all this mumbo-jumbo in detail to the audience. It’s not that this story is dumber than the rest, it’s that we’re spending more time with it and it can’t withstand the scrutiny. Imagine a straight-faced Mario game where the characters ate up a bunch of screen time discussing how to find Princess Peach and explaining Bowser’s motivations. It would be insufferable. If you took the story of Thief 1 and stretched it out into an hour-long movie of exposition and cliché character beats, it would probably be just as hard to watch as this new Thief.

And for all the efforts of game designers to turn themselves into moviemakers, they still struggle with their craft. Scenes lack contrast and a lot of the cinematography feels flat. The dialog is uneconomical, wasting too many lines and delivering too little information. The color palette is pointlessly washed out, without using the color (or lack of it) to set a mood or show the change in the city over time. It’s just pale. The audio levels are horrible, with extras occasionally drowning out the dialog of the main characters. In the end, we have a serviceable story strung out into a terrible movie.

I’m confident that if you were to take the existing Thief 2014 script, chop out half the dialog, and re-shoot it using still drawings, that you’d end up with something that felt like a classic Thief story. You would also save yourself a gigantic pile of money compared to the team doing everything using high-end mo-cap. If there was any game where they could have cut some corners and saved some money on cutscenes, Thief is it. Hollywood-style scenes are expensive, they break the flow of the gameplay, and here they put the focus on all the wrong things.

Dear games industry: Please stop trying to be Hollywood. You’re bad at it, and we don’t need another Hollywood.