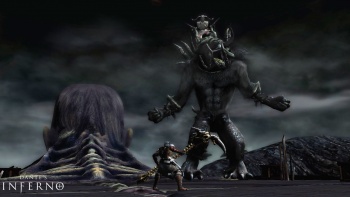 Unlike most games nowadays that try to pass themselves off as “innovative,” Dante’s Inferno is more than happy to sit squarely within its genre and not try anything crazy or new.

Though it’s happy to take liberties with its literary source material, Dante’s Inferno has no intentions of pushing the boundaries when it comes to game design. No, its developers have very clear goals for the game to stick to its genre and just do that as well as it can. Where other titles talk a big game about being “innovative,” Dante’s Inferno sticks to the tried and true.

“I’d say we’re working pretty squarely in this action adventure fighting genre,” developer Jonathan Knight told VG247. “It’s a great genre, we love the genre, and it’s more important to us to deliver a great game in that established genre than it is to particularly branch out and try too many new things.”

Knight and the EA Redwood Shores (oh wait, I mean Visceral Games) team took a somewhat similar approach to design in the development of its last hit, Dead Space, which borrowed liberally from survival-horror standards. Likewise, Dante’s Inferno takes its cues from other action game precedents.

“The combination of the cross power that has range to it and the scythe for heavy melee, I would say, is giving us more of a Devil May Cry, Japanese feel… We’re working squarely in that genre,” Knight described.

Where Dante’s Inferno does innovate, Knight said, is in its mythos and setting. “The game has a lot of unique stuff about it that hasn’t been seen before, in terms of the story, the fiction, the medieval Christian mythos,” he explained.

Blood on the Sand Sales Disappoint