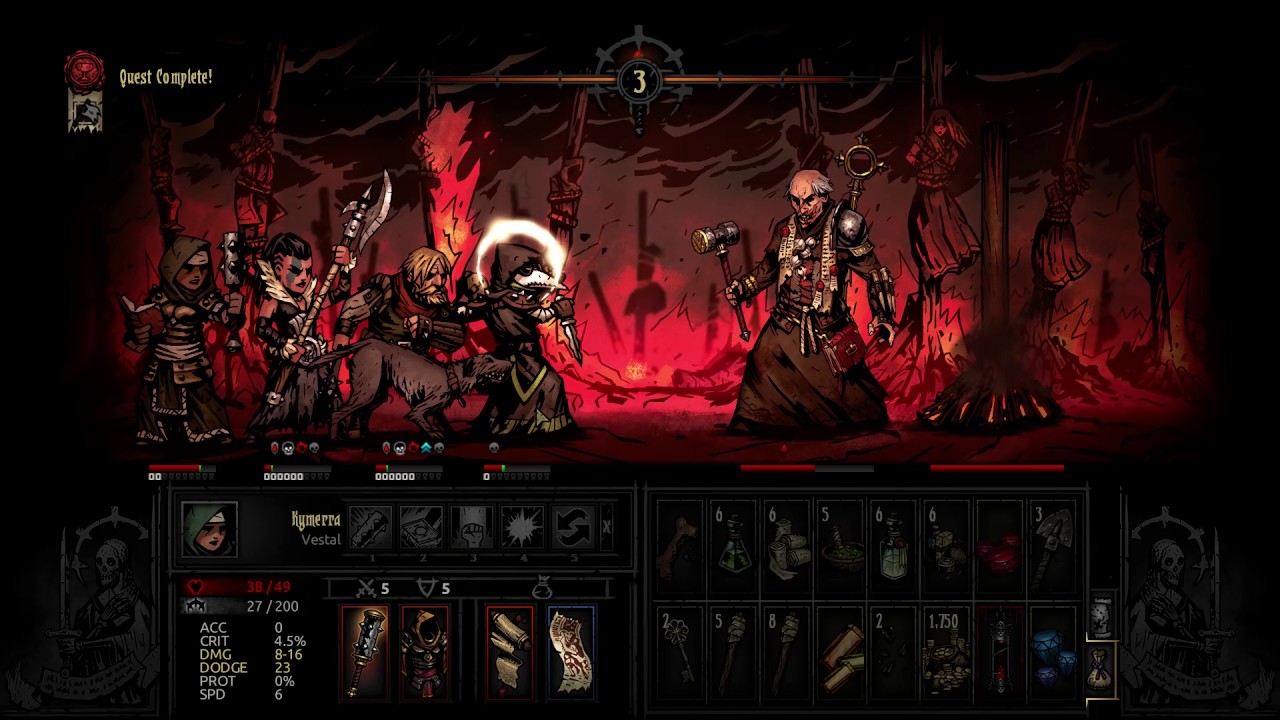 The first two additional bosses in the Darkest Dungeon: Crimson Court DLC are some of the most difficult yet. Here are a few tips to help you even the odds against the Crocodilian and the Fanatic.

Whether you’re fighting the mutated Crocodilian or the insane Fanatic, it helps to enter the fight prepared. The systems for each battle are more complicated than ever before, and toppling each opponent takes plenty of experimentation (and failed attempts) — check out some tips and strategies to make life slightly easier.

Needless to say, this guide will have spoilers. The first two Courtyard bosses you’re likely to encounter are extremely difficult, but we’ll try to keep story spoilers out of the equation.

There are six bosses in The Crimson Court DLC. The Fanatic is a wandering boss that appears in infested dungeons outside The Courtyard, and the Crocodilian is a miniboss. The other four bosses are unique and only appear in specific quests.

The hulking Crocodilian is a half-crocodile, half-insect monstrosity that thirsts for blood. It is a mini-boss that appears in the very first Crimson Court quest, and will make reappearances as a miniboss.

The Crocodilian appears with 3 vegetation enemies that cannot be attacked — their DODGE stat is too high, and any attempted attacks will miss. That means you can only control the Crocodilian’s position with MOVE abilities.

To bring down the Crocodilian, you’ll need to be able to MOVE it, STUN or BLEED. Because it takes two actions per round, bleed can quickly kill the Crocodilian.

Don’t bring heroes with low range or no mobility.

This wandering madman will appear in any dungeon with medium infestation, and if your party consists of two or more heroes with the Crimson Curse affliction.

If the Fanatic has spawned in a dungeon, his face will appear on the loading screen.

The Fanatic is most similar to the Hag in battle. He has abilities that cause stress, and can place a hero on a burning pyre, which causes damage each turn and removes them from your party until they are rescued.

The Fanatic will always get first attack, as he will always ambush the party. If you attempt to retreat, he’ll appear in the next battle you encounter. On his first turn, he will always use Sentence Rendered to place one of your heroes on a pyre.

While a character is on the pyre, the Fanatic will use melee attacks or offensive abilities that move him forward, or debuffs that move him to the back ranks.

It’s important to attempt to free the hero on the pyre as quickly as possible — if it’s possible. Like Crocodillian, it helps to bring well-geared heroes with the ability to move the Fanatic.

Debuffs are especially useful against the Fanatic. Bleed is very effective against The Fanatic, as he takes 3 actions per turn and can boost his protection stat with buffs.

Buffing your party’s DODGE also helps — if you can free a hero from the pyre, the Fanatic will continuously attempt to use Sentence Rendered on his first action every turn. Even if you get hit with Sentenced Rendered, freeing your hero forces him to attempt Sentence Rendered again, meaning he won’t attack as often with his most powerful attacks.

Got your own strategies for dealing with the first Crimson Court boss fights? Share them below!