I am on record as saying that I would like for Steam to have a worthy rival in the digital distribution market. Nothing against them, but a little competition is good for us. The problem is, very few companies have the clout, the cash, and the connections to build a proper competitor to Steam. Microsoft does, but Games for Windows LIVE is a comprehensive failure and has been so for years. They don’t care. There are a few other smaller players who have interesting approaches to a digital marketplace (I might talk about them in another column) but there isn’t anyone in the same weight class as Valve. So now we look to EA’s Origin service to see if they’re up to the job.

I would like to offer the following advice directly to the people running Origin, in hopes that they will bring balance to the digital market:

For brevity, I’m not going to pick on Origin from a technical standpoint. Yes, your game install mechanics are clunky, your system of installing DLC is reportedly horrible (disclosure: I haven’t tried it myself) and you’re missing a lot of features that Steam users take for granted. I’m not even going to get into detail about your creepy and borderline predatory data-harvesting. We can leave these issues for another time, because you have problems that can’t be fixed with a simple patch.

Remember that Steam entered an empty room in 2004. Yes, their early days were a mess of bugs and frustration. They could afford it, because they weren’t facing a mature and deeply entrenched rival in the marketplace. Your customers – the people who buy EA games on the PC – already have Steam accounts. Some of them have libraries of dozens or even hundreds of games. They have friends lists and achievements and Steam is already a part of their computer. They don’t see a need for you. You have to approach them in such a way that they will be willing to set all of that aside and begin building a new library on your service.

You seem to be operating under the idea that, “If we build it, they will come”. The problem is, someone did build it. Seven years ago. Building it is no longer enough. Now you must build it and bribe people to show up.

The first thing you need to fix is your complete lack of a catalog. Why does Steam have Jade Empire and Knights of the Old Republic, and you don’t? Where are the indie games? I find it hard to believe that Electronic Arts is having this much trouble finding people interested in their digital shelf space. If someone gets out their old copy of American McGee’s Alice and discovers the disc is scratched, it’s better that they come to Origin and give you $5 for it, as opposed to just trading for it at a used game swap. You make a little money, and your customer becomes that much more invested in their Origin game library.

Speaking of five bucks: You really need to open up Steam during a sale and take careful notes. As of this writing, Steam has almost 600 games for under $5. I couldn’t find any such games on Origin. (Not saying they don’t exist, but if they do they’re rare.) Even your really old games are sitting at a $20 baseline, as if you’re worried about covering the cost of printing manuals and burning discs. Start thinking digitally.

It takes willpower to avoid dropping money when I look at the Steam store, because everything is so dang cheap. I went into Origin this week specifically looking for something to buy so I could try out your service for this article, and I didn’t see a single thing I wanted. I either owned it already, or you were asking way too much. 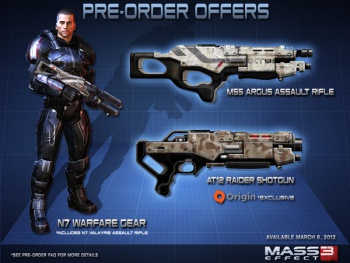 Your front page features AAA titles at retail prices. Most people are not going to impulse buy a $60 game. There are very few humans left on earth who don’t know that Battlefield 3 is out. If they wanted it, they got it. Save that splash screen for stuff that will surprise people and make them do something reckless with their money. For example: Everyone who wants Mirror’s Edge for $20 has it already. Bump it down to $10. Then down to $5. Then move it back up to $10 so the people who missed it at $5 will learn to impulse-buy next time. People should always be looking at irresistible low prices and feeling compelled to grab the deal before the price goes back up. You’ve had seven years to study this. You should get this by now.

Remember when you were bellyaching about how mean ol’ Gamestop was stealing all your money through used game sales? Note that digital games can’t be re-sold. So why are you selling your AAA titles at store prices? Why are you giving gamers a reason to buy retail? I mean, if I’m going to pay $60, I might as well get the cool box and stuff. Every sale on Origin is pure profit because you don’t have to share with Wal-Mart, and that’s one less disc floating around the used game market. You were so proud of yourselves with “Project Ten Dollar”, but if you were smart you’d be cutting online prices for “Project Keep All The Money For Yourself and Kill The Used Game Market”.

Do you remember when Steam launched on Mac? Valve gave every new user a free copy of Portal. This was a masterstroke. The game had run its course, sales-wise. It wasn’t making a lot of money for Valve, so they converted the title into a free marketing campaign. They got free press as everyone chattered about the offer. Mac gamers found themselves with a Steam account and a new copy of a critically-acclaimed game, which is like having a bookshelf with only one book on it. It’s natural for them to go browsing to see if there’s anything else they might want. Even better, every new Portal fan is potentially another person lining up to buy Portal 2 for full price on launch day. You should be doing this same trick with Mass Effect.

Speaking of Mass Effect, I see that you’re going to make Origin mandatory for all Mass Effect 3 players. This is a pretty cynical move. Your fans have been building their Mass Effect library on Steam, and now the final title of the set will only be available on a platform that didn’t exist when the series began. In effect, you’re punishing your biggest fans.

If you were actually thinking of your customers (and if you were smart like Valve) then you would give free copies of Mass Effect 1 & 2 on Origin to people who already have copies through Steam. Or maybe free copies for people who have valid hard copies. Whatever. Something. They already own the game, just give them some kind of reason to feel invested in Origin. Remember, establishing Origin should take priority over the profit margins on five year old games. Get your priorities right. This is your future.

EA, you were late to the market, you’re short on features, your prices are way too high, your privacy policy is offensive, and your only plan is to strong-arm fans into signing up instead of trying to lure them with deals and giveaways. You’ve been one of the big dogs for over a decade now. But with Origin, you are the little guy, and you are up against people who saw this future coming before John Riccitiello ever got near the CEO chair.

You need to start fighting like the underdog. Because you are.

Shamus Young is the guy behind Twenty Sided, DM of the Rings, and Stolen Pixels. He thought it was cute how Origin listed nothing but demos under “Free Games”.