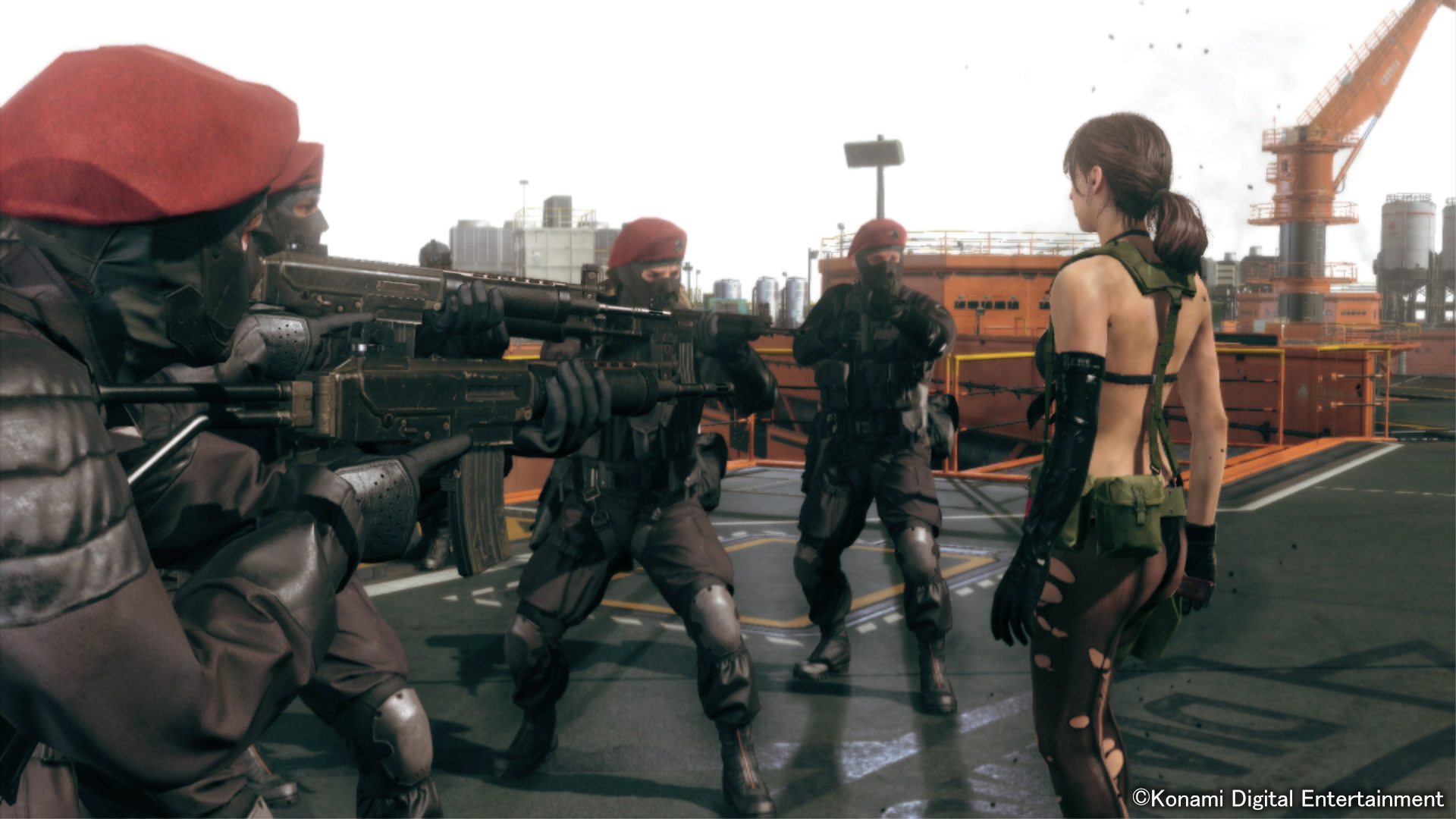 After Snake completes his mission in Chapter 1 of Metal Gear Solid 5: The Phantom Pain, you’ll unlock a series of special hard difficulty missions. Four of these [EXTREME] missions feature boss battles — and that’s just as difficult as it sounds. Get our tips for easy(-ish) victory with these mission-specific S-Rank guides.

These extra hard optional boss battles aren’t required to earn any of the ‘true’ endings to The Phantom Pain so don’t sweat skipping if they’re too much of a slog. Two of the fights include snipers that kill our hero Snake in a single shot. That’s rough. But, there are alternate methods to deal with these threats. Calling in heavy support, dropping cargo and sneaking away — see what works and what doesn’t in four of the hardest missions of Metal Gear Solid 5.

Even still, there are strategies to make these fights more manageable. Often you’ll find these bosses can kill Snake very quickly if you don’t use everything Diamond Dogs has to offer.

During the battle against Quiet, she will always kill Snake in a single successful hit. There are two strategies for defeating Quiet the easy way.

The Ammo/Weapon Crate method involves calling in supply crates right on Quiet’s head. Hide behind rubble and peek out with binoculars — if you’re using binoculars from cover you can spot Quiet without her seeing you. Press [R2/RT] to mark her, then call a supply drop from the map menu.

Unlike regular Quiet, [EXTREME] Quiet will jump away at the last moment. Wait until the supply crate timer is around 10, then pop out of cover to bait her into shooting. Continue to bait her until the cargo drop hits her. Just hit her 5 times to win.

If that’s too complicated for you, just enter the mission with an armored vehicle or tank. Bring a rocket APC, wait for the coast to clear, then climb into the tank where her sniper rifle can’t kill you. Use first-person sights to target and fire the main cannon until she’s down.

Eventually, her rifle will destroy the tank. Just call in another one, or finish the fight with a sniper rifle. Bring the most powerful rifle you can develop.

The Armor Parasite Unit can quickly overwhelm Snake with high-power attacks. Most vehicles, like tanks, won’t work in this fight. The four soldiers summon clouds of tank-destroying rust that makes vehicles completely inoperable.

There’s only one vehicle that’s nimble enough to dodge these attacks; D-Walker. Develop heavy armor chassis and the most power minigun, along with the autoloader upgrade to carry more ammo. Make sure these projects are equipped before attempting to deal with the Skulls.

Wear Battle Dress, and bring a Shield to keep your back protected while driving D-Walker. Quickly rush into the cockpit and activate wheel-mode to drive circles around the Skulls.

Pick your targets and bring them down one-at-a-time. At half-health, they’ll constantly recharge their rock shield. When they retreat to do this, follow and try to finish them off.

Often they’ll stand still and summon brown dust clouds. Stay away or D-Walker will rust and break. If the Skulls summon black rocks above their heads, they’re about to launch a powerful homing attack. Shoot the rocks to break them, or shoot the Skull soldier to damage them, which also eventually leads to breaking the floating projectile.

If D-Walker is destroyed, stay back and summon another D-Walker by calling in a Buddy. It’s expensive on GMP, but you’ll still earn an S-Rank. Try to avoid killing or hurting the Puppet Soldiers, too — if you defeat the Skulls, the Puppet Soldiers are freed, allowing you to Fulton them all for easy high-level recruits.

Unlike the other [EXTREME] missions, this one is only partly a boss battle. At the start of the trek toward Code Talker’s mansion, you’ll encounter a Skull sniper unit. Just like Quiet, the Skulls will kill you in one hit.

Instead of fighting them, it’s easier to just completely avoid them. Bring D-Horse and follow the water upstream until the Skulls appear. Ride toward the ridge where they’re positioned and use it to shield your approach, then ride up to the ridge on the left. Stick to it and ride full-speed toward your objective.

Using D-Horse, you’ll survive one hit from the Skulls. Jump back on and continue riding if you’re hit. If you follow the simple path outlined above, it’s easy to ride past the snipers and continue your mission toward Code Talker.

Enter through the mansion front door, go into the basement and collect Code Talker, then leave with him on your back, going the opposite direction to escape. Instead of going south, travel up the road northwest to the helicopter extraction.

The final boss doesn’t have to be the hardest mission. Go in equipped — bring Battle Dress armor, a Grenade Launcher and a Rocket Launcher. The CGM-25 is the best weapon against Sahelanthropus Snake can carry.

Drop into the mission with a BRT tank. Red or Black BRTs are the best vehicles to use — you’ll need their speed and the autocannon can devastate Metal Gear. Pilot your vehicle and switch to the first-person sights.

To make this battle easier, target certain sections of his body to eliminate his powers. First, target the white cylinders attached to his back. They’re visible just behind the ‘rib-cage’ area of the body, with two more on it’s abdomen.

Eventually, Sahelanthropus summons a rust cloud that destroys all vehicles in the valley. Most likely, that’s how you’ll lose the tank. Jump out and fire CGM-25 rockets.

Keep far away. When Sahelanthropus uses its whip, shoot the black rock to escape. If he transforms and aims with the rail gun on its back, immediately hide and take cover! One shot will kill you. Stay down and wait for him to give up the search.

When the rust cloud clears, you can call in a second tank to deal more damage, but you’re more likely to get a better score if you complete this battle on-foot.

Supply drops will automatically drop while you’re in combat. Just watch for the markers and refill as needed.

If Sahelantropus lunges at you in slow-motion, switch to the pistol and shoot the Third Child as he appears. Otherwise, it’s instant death.