Sometimes I worry that my wife is going to leave me. She can’t, I know she can’t, but that worries me even more.

Please don’t misunderstand me, I don’t want her to leave, but if it’s what she wants, she needs to be able to leave me. Because otherwise we’re trapped together. And though life in Skyrim is brief I don’t know if I can stand even the short time we’re allotted on this plane.

Once we had so much promise. I confess, even when I first met her-when I meddled in the little love triangle between her, Sven, and Faendal – I kept casting my eyes toward the Riverwood Trader and thinking how much better I was than either of them. Of course, I was nothing then, just some one-eyed Nord delivering messages, not at all worthy of a nice Imperial girl working in a respectable shop. But then I learned the Voice, then I became a Thane of Whiterun, then I got a nice respectable house in the Plains District. Then I heard the eagerness in her voice when I returned the Golden Claw to the shop. (What girl doesn’t love a man who’d clean out a barrow full of Draugr for her? The more you smite, the more they’re smitten.) It was a lovely wedding. We had a spark then.

Any spark is long dead, smothered in the ashes of endless cook fires and the drudgery of everyday life. She has her shop and I have my adventuring, and we never meet in-between. “Hello my love, home from some adventure, I bet,” she says when I get home, over and over. When I leave, it’s “Goodbye, my love,” in that breathy, disappointed tone of hers. She’s constantly thanking me for bringing the Claw back where it belongs. I used to wonder why she still talked about that when it happened years ago, then I realized that the Claw was the only thing we’ve shared other than a home.

But is that my fault? We never talk about anything. Our lives are totally separate. Even when she greets me by saying I’m home from an adventure, I can’t tell her what I’ve been doing. Maybe that’s better, how would that conversation go?

“Interestingly enough,” I’d say, “I traveled to Sovngarde, land of the glorious dead, and gained entrance to the Hall of Valor by defeating the god Tsun in single combat. Then I rallied the heroes of old to battle and defeat the World-Eater dragon Alduin, thus saving Tamriel from annihilation.”

Then there’d be a long silence, and I’d add: “How was your day at the shop?”

She wouldn’t have any interesting stories because never leaves the house. She doesn’t have hobbies, she doesn’t have friends, she doesn’t even go to the temple as far as I know; all she does is manage her shop and occasionally cook or use the alchemy lab. I want her to be happy, but I feel like she’s isn’t really trying. Most of the time when I come home, I just find her sitting in a chair, staring at nothing. Sometimes she sits at the kitchen table, drinking endlessly from a pewter mug. That’s when I feel the worst, watching her fill the uneasy silence between us with mead, as if she can take the uneasy quiet of our years together and drown them like a bag of rats. Who’d have thought marrying the Dragonborn would make her life so dull?

But no, I’m projecting. It’s my fault. I’m a terrible husband.

I leave for weeks without telling her when I’ll be back. When I return, I crash in at any time of the day or night, covered in blood, stinking of potions and Nord mead. Instead of returning her greeting, I walk past her and start rummaging in the drawers and cabinets for coins, scattering plates and cups. Then I trudge up to our bedroom and shovel equipment into the chest: axes, breastplates, spell books and orichalcum ore. None of that would be too bad if it weren’t for the dead things, the wolf pelts and giants’ toes, raw beef and dragon bones. I really hope Falmer Ears don’t smell, because I’ve got about thirty in there. All of that next to the bed we sleep in – or don’t sleep in, I suppose. I’m a werewolf, so apparently a little Lover’s Comfort is out of the question.

That done, I stomp downstairs again still wearing my armor to talk to Camilla. First I ask her for a home cooked meal. When I get that, I ask about her shop – but really I don’t care about how the shop’s doing, I’m just asking for my weekly cut. Once I have my food and my money, I leave without saying goodbye.

In a twist of tragic irony, my house is named “Breezehome.” And that’s what I do, I breeze in and out when I feel like it.

After doing this for months, I started to feel guilty. By “I” I don’t mean Helsher, the Level 70 Nord, I mean Rob Rath, the 28 year-old game journalist. The whole relationship between Helsher and Camilla was wrong. Very wrong. And what bothered me most about it was that this wasn’t a “bad” relationship as far as Skyrim was concerned, it was just the normal day-to-day interaction between husband and wife.

This weird dissonance didn’t come about through misogynistic programmers or some kind of wish to replicate a medieval relationship (after all, the same thing happens if you marry a man) but simply through a lack of options. Really, that’s what bothered me the most – I didn’t want to be a bad Skyrim husband, but the game didn’t give me any other choice. I literally couldn’t ask Camilla how her day was, or tell her she looked nice, or come home to find she was out on some business. I couldn’t even say goodbye when I left or tell her how long I’d be. Even more unnerving was the lack of physical contact. Here’s a list of things my character couldn’t give his wife: a hug, a kiss, a pat on the back, a peck on the cheek, a firm handshake, a present. Instead, the only interactions are: give me food, give me money, and we’re moving somewhere else. 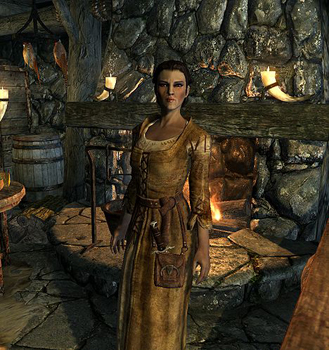 To anyone who’s been in a relationship, this seems really weird, a combination of loveless sterility and domestic exploitation. If I treated my real-life girlfriend the way characters in Skyrim treat their spouses, she wouldn’t be my girlfriend anymore.

Without a doubt, part of the problem is that relationships are a challenging thing to get right in any game, much less an RPG. Relationships are difficult to portray in games because the audience’s familiarity with a real-world experience narrows the margin of error. None of us know what it feels like to fight a dragon, so developers have a lot of leeway to fudge details – but everyone knows what it’s like to be in love. Our brains are so attuned to picking up social cues and emotional undertones that when we see a relationship so stilted and lacking in intimacy, it’s hard not to feel that doubt and hostility are bubbling beneath the surface.

Skyrim‘s character models, unfortunately, contribute to this sense of dissonance. Whenever Camilla talked to me, her face never changed expression. Even when her voice lilted with the pleasure of seeing me, or she gave me (what I’m sure was intended to be) a breathily sexy farewell, she had the same blank expression. According to finely-tuned human instinct, blank expression plus over-emphasized emotion means someone’s faking it, just like lack of physical contact and communication means loveless marriage. This is how my parents acted, I kept thinking, after they got divorced. For a long time I thought I was projecting the dreary narrative onto Helsher and Camilla because of my family background, but no: The game itself fed me these cues, however unintentionally.

The real tragedy is that I actually liked Camilla as a character. Though she wasn’t my first choice of wife, if I’m honest – I liked Ysolda’s plucky goal to become a businesswoman, but her marriage quest glitched and never came up – there just seemed something that felt narratively right about Camilla. She was one of the first people in Skyrim that I interacted with at any length, and there was something that felt genuinely human about her romantic problems and her relationship to her brother. She’d always treated my character well, and her voice actor managed to instill her with a sense of gracefulness and even a touch of awe whenever she spoke to me. Going back to the Riverwood Trader seemed like something my character would do, to go find the girl who liked him before everyone knew him as the Dragonborn. Sure, the veneer of her being a three-dimensional character was thin, but it was at least there.

By marrying her I destroyed all that. Instead of a character, she became a cross between an ATM and a vending machine. Marriage proved the end of her story, rather than a beginning. She never grew or changed further as a character, and her dialogue whittled down to six or seven maddeningly repetitive phrases. Her cyclical blandness, while catering to my every need, made me feel like I’d moved from Whiterun to Stepford. No matter what I did to elicit even a basic reaction from her – bumping into her, standing in the fire, dropping dragon bones on the floor, casually lounging around the house as a werewolf – she just kept stirring the pot, giving me a glassy stare and saying: “Hello my love! Back from some adventure, I bet!” This, I’m sure, is why Skyrim forums and YouTube videos are full of players that admit to murdering their spouses. Despite both interspecies and gay marriage being legal in Skyrim, divorce is apparently a taboo, leaving homicide as the only option if you (understandably) can’t stand to hear that “welcome home” stock phrase one more time. Frankly, after hearing “Goodbye, my love,” at least a hundred times, this juror wouldn’t vote to convict.

I never murdered Camilla – not my style really – but I did start to avoid her a little. I’d wait until the gold from the shop accumulated before picking it up so I didn’t have to hear her dialogue too many times, and I stopped asking for home-cooked meals. Moving to another house crossed my mind, but I was big into smithing and Breezehome was conveniently situated next to Warmaiden’s. Also, as a character who didn’t use much magic, I was perpetually poor from blowing wads of cash on health potions and didn’t want to drop the Septims for another crash pad.

One day though, I finally found a way to be a good husband – or at least not a bad one. When I came through the door I saw Camilla sitting in a chair with her hands in her lap, chin up and impassively gazing at the wall.

Creeping around the other side of the fire so as not to disturb her, I took the chair next to her and stared too. If this is what she was going to do, we could at least do it together.

Both of us sat by the fire, looking intently at nothing, our faces as blank as the wall that stared back at us.

It was a special moment.

Maybe we should adopt a kid.

Vita Gets Bundled With PlayStation Plus