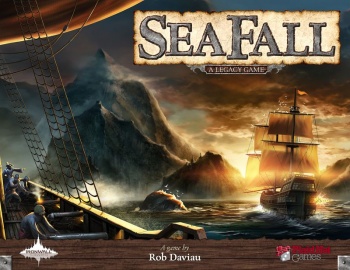 After twisting classic game’s such as Risk and Pandemic with his Legacy mechanic, designer Rob Daviau finally opens up about his next original game, SeaFall.

Few board games are expected to make as big a splash in 2016 as Rob Daviau’s SeaFall, but details have been scant until now. We knew it was going to be a 4x game – explore, expand, exploit and exterminate; we’d heard it was about naval empires racing to explore the unknown seas and fighting each other over the prizes therein. Most exciting of all, though, we knew it was going to be the third Legacy game.

2011’s Risk: Legacy saw Daviau’s design cred skyrocket, like a missile you want to drop on Iceland just to see what happens. He took the classic game of Napoleonic warfare and tore it apart – or, more accurately, he asked the players to tear the game apart. We shredded cards, put stickers on our sheets, wrote our names in permanent marker and left most of North America a smoldering, radioactive wasteland. Aspects of the game emerged as players achieved certain goals – drop three missiles in one battle, for example, and you open the dreaded envelope.

Last year’s Pandemic: Legacy turned the game of fighting off global disease and gave it a year-long campaign, with diseases mutating and your scientists growing stronger, or disappearing in the chaos. Rob Daviau took a great coop experience and sent it to the top of Board Game Geek’s list of the best games of all time.

That brings us to SeaFall. This year, Plaid Hat Games will be publishing Daviau’s long-awaited original game. In an interview with Polygon, he expressed, “It took me less time to get my bachelor’s degree than it did to make this game.”

Describing his three Legacy games, he says that Risk and Pandemic were more like episodic, action television shows – SeaFall, on the other hand, will be more like Lord of the Rings. The man knows how to sell to his audience, I’ll give him that.

The meat of the game will be in exploring. In each game, players set off from their coastal empires in capital ships, and when they discover something out in the vast ocean, they place a sticker on the board to represent it. A smaller map representing their discovery, such as an island to be charted, goes alongside the main board. In every subsequent game you play, that discovered object will remain. No longer are you modifying a known world; SeaFall has you constructing one out of whole cloth.

The game will come with a choose-your-own-adventure style book, complete with more than four hundred entries. When players reach certain milestones, an entry from the book will be read aloud, pushing the game’s narrative forward and likely changing the way it will be played from then on. Gamers will be able to make choices here, not knowing quite what the outcome will be. Do you trade with the natives, or steal from them? Do you pay the ransom to return your kidnapped crew, or bid them adieu?

Since it’s a competitive game meant to be played over many sessions, some thought had to be given towards how to limit players’ aggression.

“You can’t just declare war infinitely,” says Daviau. Each player will get “enmity” tokens, that have various effects. “…when your eight tokens run out, you’re done. It’s basically saying no, you’ve reached your jerk limit.” Enmity that’s left on the board becomes permanent – you’ve got to keep your reputation in mind, game after game.

SeaFall is going to be available at GenCon in May of this year, though we don’t know what the price will be, or how many copies you’ll find at the convention.

Check out the playtesting photos in the gallery below, and let’s see if we can figure out some more details in the comments.