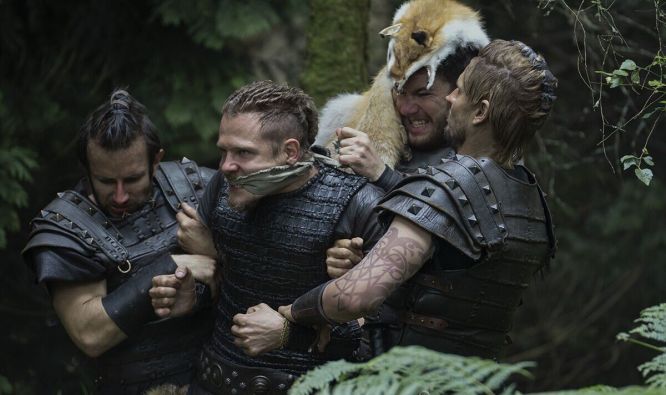 The Jomsvikings and their home base, Jombsorg, play a significant part in season 2 of Vikings: Valhalla on Netflix, but did they exist in real life? Here is the answer based on recorded history.

The Jomsvikings May Have Existed in Real Life, but Evidence Is Thin on the Ground

The Jomsvikings were, according to legend, an order of Viking mercenaries who would sell their services to anyone who had the coin. Vikings: Valhalla treats them as real and makes one of their number, Jorundr, a character in the show.

But it’s possible that they were entirely fictional. At the very least, the location of Jomsborg remains uncertain. They’re mentioned in several Icelandic sagas, most notably the Jómsvíkinga saga that was likely written during the thirteenth century. They’re also referred to by the Flateyjarbók (“Book of Flatey”) and The Sagas of Olaf Tryggvason, the latter of which was featured in the former.

Since those latter two were written well after the Jómsvíkinga saga / Saga of the Jomsvikings, it may well have been that both the Book of Flatey and The Sagas of Olaf Tryggvason drew upon that first saga. Certainly, Jorundr Torvilsson, the Jomsviking who figures into the second season of Vikings: Valhalla, isn’t a known historical figure.

The Jomsvikings were, according to legend, active during the 10th and 11th centuries. Why weren’t they around for longer? Supposedly because King Magnus Olafsson, who also appears in season 2 of Vikings: Valhalla, led an army against Jomsborg.

We’re not going to reveal whether the show’s version of Jomsborg survives season 2, but according to legend, Magnus’ attack was the end of the Jomsvikings. However, historians have debated as to where Jomsborg was, some doubting its existence.

It’s been suggested that the Polish town of Wolin could, in fact, be where Jomsborg was sited, but again, there’s no conclusive proof. Establishing its location would go some way to confirming that the Jomsvikings did actually exist.

Could the Jomsvikings have existed in some form or other but had their exploits exaggerated by those who chronicled them? It’s definitely possible. They have the kind of reputation that appeals to storytellers — a legion of highly disciplined pagan warriors who were very selective about whom they admitted. Those who wanted to join would have to duel an existing Jomsviking. They were also expected to show no fear and adhere rigorously to the group’s code.

Yes, it all sounds very cool. The same is true of berserkers, another Norse legend that has warriors going into an insensible, uncontrollable frenzy. But as YouTuber Lindybeige points out, that seems to be a case of exaggeration and wishful thinking.

Vikings: Valhalla isn’t the only property to make reference to the Jomsvikings, far from it. They’ve also appeared in “historical” fiction, cropping up in the likes of Assassin’s Creed Valhalla. You can read a translated version of Saga of the Jomsvikings if you want to learn more about their legend.

But as to the actual Jomsvikings, there’s a lack of archaeological evidence to say they did exist in real life, and if they were real, their reputation and deeds were likely embellished — but it makes for good television like Vikings: Valhalla.