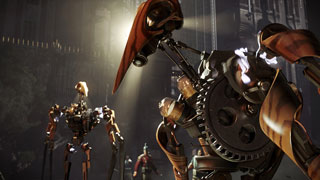 PC gamers may be best off waiting a couple days for the performance patch to hit.

Dishonored 2 is a Bethesda game, which means of course it is bound to launch with a few bugs and issues. PC gamers are reciving the brunt of it, as widespread reports led to Bethesda publishing a PC guide full of suggestions to improve performance. Now, it has assured PC gamers that a patch is on the way, and should be available in the coming days.

“We have been monitoring the PC forums and social channels and while we’re excited to hear that many of you are enjoying the game, we are disheartened that some of you are experiencing PC performance issues on some systems,” wrote the blog post. “We are actively working to provide an update to address your concerns. The patch and its release notes will be available in the coming days.”

Bethesda said that the patch would include improvements to allow for more consistent frame-rates on affected systems.

I can’t speak for anyone else, but I have personally run into quite a few problems with the game while live-streaming my play-through. My system isn’t exactly top-of-the-line, but it is quite beefy (GTX 970, Intel Core i7 3.5Ghz, 16 GB RAM) and I am struggle to get a solid 60 FPS on the game’s “auto” settings (a mixture of high and very high). I had to turn everything down to “medium” to maintain a solid framerate, and even then I still run into the odd random crash.

If you’re a PC gamer and you haven’t picked up the game yet, it’s probably best to just wait a few days.