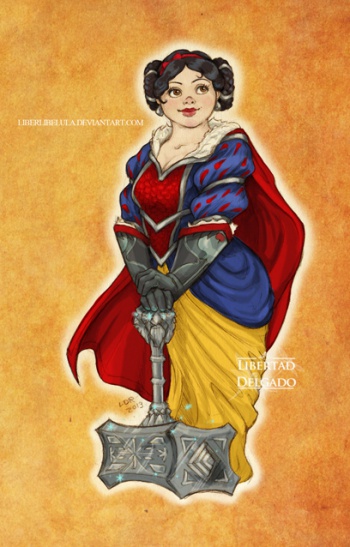 The past year has been inspirational for artists who specialize in Disney mash-ups. We’ve seen the Disney Princesses as Final Fantasy job classes, Avatar: The Last Airbender characters, and even zombie apocalypse survivors. But we simply still haven’t hit the roof on these, which is why we can introduce a Disney mash-up with one of the most recognizable game franchises: Warcraft.

Designed by DeviantArt’s LiberLibelua, these “Disney Meets Warcraft” pieces introduce versions of the Princesses from the fantasy-inspired Azeroth. Snow White, for example, is now a Dwarf from Forjaz. Ariel is a curious Gnome. Cinderella is a Draenei. Beauty and the Beast‘s Belle is a Pandaren. Even Mulan is here, as an Orc fighting for the Horde. And the reinterpretations keep on coming.

LiberLibelua’s work covers classic and modern Disney Princesses, and shows a good eye for getting to the essence of each character. I imagine these are the races each Princess would pick when they get together to play tabletop RPGs, since playing MMOs at computer screens isn’t a dynamic image. Although given the talents of fan artists out there, it’s possible someone will prove me wrong on that score very soon.