Developed by id Software and Certain Affinity. Published by Bethesda. Released on May 13, 2016. Available on PC (reviewed), PS4, Xbox One. Review code provided by publisher. 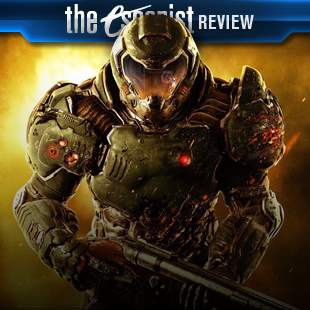 Just hearing someone mention Doom carries some baggage in the gaming world. It conjures up memories of playing shooters with keyboard controls, of demons, secrets, and explosions. It’s a legacy that is challenging to live up to. But id Software’s newest take on the series manages to do just that.

If you’re the sort of person that enjoys playing a shooter that lets you assess, plan, and then cautiously attack, Doom may not be for you. From the moment your character, the aptly named “Doomguy,” awakens on a stone slab surrounding by hellish imagery, Doom turns the speed up to 11 and never backs off. There’s no cover system, and no regenerating health. There’s just frantic gunfire and hordes of Hell’s minions to slay.

For those who played previous Doom titles in those dark days of yore, you’ll find much that feels familiar. That familiarity will give you some great moments throughout the game, when you see what the modern take on the enemies you remember looks like, or when you find an iconic weapon like the BFG 9000. You’ll likely also find that your fast-twitch shooter skills have atrophied a bit over the years, because there’s almost no game out there right now that embodies a pace this frenetic.

The most important thing to realize when playing Doom is this: you will die. A lot. Hell’s hordes are not gentle or forgiving, and one mis-step in a room full of them will equal your demise. But even in death, there are some great moments. The first time I died because a cacodemon took a bite out of my torso, I literally laughed out loud. Throughout the campaign, death and restarts were a common occurrence, although I did improve as I regained by classic shooter muscle memory.

Doom manages something I wasn’t sure was possible – it blends classic mechanics with modern touches to make a really attractive whole. There’s a slew of weapons at your disposal, from a lowly pistol with unlimited ammunition to Gauss Cannons, Rocket Launchers, Chain Guns, and of course, the Super Shotgun. Naturally, your favorites may be different than mine, but because of the number of targets you have to shoot, you’ll find yourself using pretty much everything in your arsenal to make it through.

The story content could have been as simple as “OOO! KILL DEMONS!” and the game would have worked just fine.

The modern side of things is a well-implemented upgrade system broken into three parts. Weapon upgrades are found throughout the game and allow you to add options to your existing weapons. For example, the standard shotgun can be upgraded to fire a three-round burst of an explosive shell. Each upgrade can be further advanced to improve its functionality. Likewise, your Praetor Suit can be upgraded to add damage resistance, recharge grenades faster, and the like. Finally, you can find Argent Energy capsules that let you raise your maximum health, armor, or ammo values.

Another new mechanic is Doom‘s “Glory Kills.” When an enemy is near death, they’ll stagger, and you can get close and finish them off with a melee attack. This is actually hugely important in the context of the game, because doing so means that you’re guaranteed to get a health drop. While enemies always have a chance to drop health and ammo, a glory kill guarantees you’re getting a few precious health points back, and that means that you want to charge in like crazy to rip off a demon’s head with your bare hands. You’ll also find a chainsaw that you can use to kill enemies and guarantee ammo drops, but the fuel that powers it is rare, so it should be used sparingly. I often found myself being overly conservative with its use, much to my detriment.

All those weapons help you fight your way through a simple story: The UAC has been tapping into Hell to harvest energy, and things didn’t turn out exactly as they planned. You need to clear Mars of the demon infestation, and close the portal between Mars and Hell. Of course, this doesn’t go exactly as planned, and you’ll need to make multiple trips between Mars and Hell to pull it off. Along the way, you kill a whole lot of demons. The end. There’s a bit more to it than that, and this Doom has a story that was much deeper than I anticipated, but ultimately, it didn’t matter. The story content could have been as simple as “OOO! KILL DEMONS!” and the game would have worked just fine. Digging into the lore and story is just a shiny cherry on top of a really awesome cake.

The backdrop for all of these missions are beautifully rendered levels that feel massive. The changes that the world undergoes as you progress between Mars and Hell are obvious, and it gives the feeling that you are affecting this world, even if it looks like you’re doing so by blowing it up. Doom is a dark game, but it also has its own dark beauty, and it’s easy to find yourself admiring the landscapes once your killing duties in an area are done.

Once you finish the 12-hour-long campaign, there’s also a full multiplayer component to Doom. It includes six modes, from classics like Team Deathmatch and Domination to some new ones like Freeze Tag and Soul Harvest. While they’re fun enough, Doom‘s multiplayer has one major problem: it doesn’t feel like the rest of the game. The pace of the multiplayer is noticeably slower, and it changes everything. The frantic feeling you get in the campaign is gone, and in its place is something that feels more akin to conventional multiplayer shooters like Call of Duty. This is likely because the multiplayer wasn’t developed solely by id. Instead, it was created in conjunction with Certain Affinity, who has worked on multiplayer for both the Call of Duty and Halo franchises in the past. The multiplayer isn’t bad by any stretch, but it just doesn’t feel like it matches up with the game you play in single player.

The one exciting feature of the multiplayer is SnapMap. This new feature lets anyone build new levels (for single or multiplayer) from scratch, and you don’t need to be a programmer to make it work. You can start with some pre-made blueprints, use preset rooms, and easily put together a level. Adding monsters and items is straightforward, and you can even play it through to test it before publishing for the world to play. It’s easy to grasp, and has plenty of helpful tools if you’re a beginner to level building.

Doom pulls off something many people thought wasn’t possible in this day and age: A shooter with a long, involved single-player campaign that is better than the multiplayer in every way. It manages to hang onto the things that made the classic games great, and to graft a modern upgrade and progression system onto them without diminishing the experience. It’s a throwback to older days, with massive, intricate levels, tons of enemies, and a pace that never lets up. If you’re a fan of shooters, but want to play something with a classic feel, you absolutely cannot go wrong with Doom.

Bottom Line: Doom manages to challenge the conventions of the first-person shooter genre by going back to its roots. It will have you breathing heavily, cursing in frustration, and screaming in triumph. The multiplayer is a bit of a letdown, but the campaign is absolutely glorious.

Recommendation: If you’re a fan of fast-paced games, or you love classic shooters with great campaigns, you have to play Doom, period.