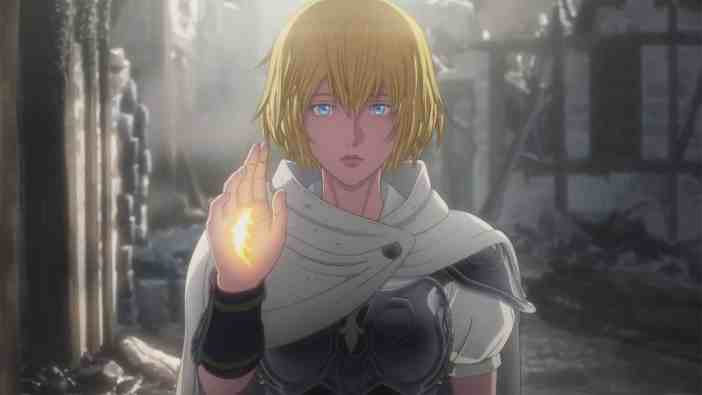 It is mostly a poster with a floating shirtless dude, but Netflix is showing off its first look at its upcoming anime video game adaptation, Dragon’s Dogma, which will release on Sept. 17. Announced back in March of 2019, the series is based on the Capcom video game of the same name, which released in 2012 and most recently landed on Nintendo Switch with the enhanced version, Dragon’s Dogma: Dark Arisen.

Only the Arisen can face the Dragon and defeat the apocalypse. Here's your first look at the anime series adaptation of Capcom's action fantasy classic Dragon's Dogma, arriving September 17th. pic.twitter.com/UxJMcUrsdp

The show follows a similar but different storyline from the game, which has become a cult hit over the years. Ethan becomes the Arisen when his heart is stolen by a dragon. He heads out on a dramatic quest to reclaim his heart, but his humanity is quickly being taking away every time he battles a demon. He’ll travel along with his pawn, a human-like being without emotion who follows the Arisen, named Hannah. There’s definitely a lot of lore to wrap your head around.

A new Arisen is born! Follow Ethan, along with his pawn Hannah, in his journey to reclaim his heart. 🔥@Netflix Original Anime Series Dragon's Dogma releases worldwide on September 17, 2020
🐉 https://t.co/Eu6FKFOJjr pic.twitter.com/yxWD74oTWm

The series is being put together by animation company Sublimation as part of a deal Netflix struck with the studio and two others last year. Netflix has been building its direct anime line for a while now, understanding that there’s a global audience for the product and producing a series of well-regarded shows including the adaptation of Castlevania. If Dragon’s Dogma takes off, maybe we’ll finally get the Devil May Cry anime series from the streamer that has been rumored for ages.

For fans of the original game, this could also be a good sign that a sequel might be coming at some point. If Capcom is invested enough in the IP to make an anime, it must still have plans for the games as well.