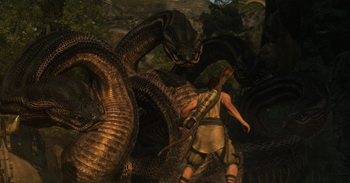 Capcom has announced that the publisher will release a PC version of Dragon’s Dogma: Dark Arisen to Steam this coming January. An expanded version of the open world action-RPG which was first available Xbox 360 and PlayStation 3, the PC version will feature improved graphical fidelity over the console releases.

Dragon’s Dogma is a high fantasy action-RPG aimed at being approachable by players less skilled in active, real-time play through a system of “pawns”, NPC characters in the party (some of which are drawn from other online players) indirectly controlled through AI and commands issued by the player. First launched in 2012, the expanded Dark Arisen release now en route to PC added an additional zone to explore, while including all previously released DLC.

The PC version of Dragon’s Dogma: Dark Arisen will be priced at $29.99.

The Escapist gave the original Dragon’s Dogma release a rating of 4.5/5 stars in its review, with former Editor-in-Chief Greg Tito praising the party system and customization options while criticizing the pacing of some boss fights and the game’s brown color palette.