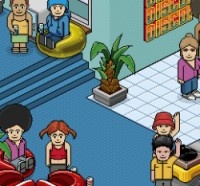 A Dutch youth has been arrested for stealing virtual furniture in Habbo Hotel, a virtual community aimed at teenagers and young adults.

The 17-year-old was accused of stealing over $5800 of virtual property after Sulake, the company behind Habbo Hotel, contacted police with the complaint. Five 15-year-olds have also been questioned in connection with the incident. The six teenagers are suspected of moving the stolen furniture into their own Habbo Hotel rooms.

“The accused lured victims into handing over their Habbo passwords by creating fake Habbo websites,” a Sulake spokesman said. “In Habbo, as in many other virtual worlds, scamming for other people’s personal information such as user names has been problematic for quite awhile. We have had much of this scamming going on in many countries but this is the first case where the police have taken legal action.”

The spokesman said the growing number of sites that imitate Habbo Hotel in order to steal users’ login details led to the company’s involvement, and that the police were brought in because real-world currency was involved. “It is a theft because the furniture is paid for with real money,” the spokesman said, adding, “The only way to be a thief in Habbo is to get people’s user names and passwords and then log in and take the furniture.”

First launched in Finland in 2000, Habbo Hotel has since expanded to over 30 countries, and now boasts over six million unique users worldwide.