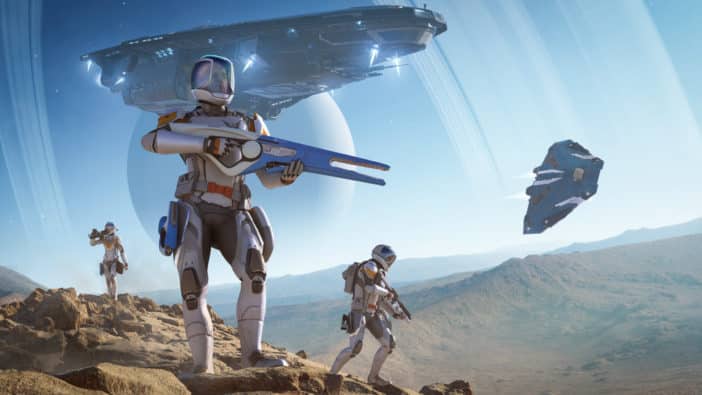 Elite Dangerous players will finally be able to roam around on foot with the game’s next expansion, Elite Dangerous: Odyssey. Developer Frontier Developments, which also launched Planet Zoo late last year, shared the news today, letting players know that they’ll be able to embark on the new quest come early 2021. There’s no gameplay yet, but a taste of this next step can be seen in the announcement trailer.

Players will finally exit their spaceships to take in the new settings of many of the game’s planets, with the developer promising discoverable outposts, settlements, and “unrestricted freedom.” Contracts will also let players interact with NPCs through various objectives, as Frontier says options to engage in stealth, all-out combat, diplomacy, and commerce are all planned to come in the expansion. Additionally, you’ll be able to form alliances at public outposts that also offer a place to upgrade weapons and gear. It sounds like exploration and combat will take place exclusively in first-person, as well.

Frontier founder and CEO David Braben spoke on the expansion in a press release:

Odyssey is our most ambitious Elite Dangerous expansion to date. Extending coverage to the super-fine scale that is needed for on-foot gameplay while maintaining the vast raw distances measured in light years, is a huge achievement by the team, and greatly extends the already rich Elite Dangerous experience. We hope you will join us to continue this journey of discovery and adventure when Elite Dangerous: Odyssey launches in early 2021.

Elite Dangerous launched on PC in 2014 as a spaceship job simulator where players were granted vast amounts of freedom to play their way in a to-scale version of the Milky Way galaxy. However, players have been restricted to their cockpits until now. Multiplayer functionality encourages a thoughtful approach to every encounter, as each player met could amount to anything from a brief interaction to death. If a less intrusive experience is more your speed, Elite Dangerous has single-player options, too.

For now, it’s unclear if the expansion will be free or not. The Planet Zoo developer’s space exploration game can be purchased on Mac, PC, PlayStation 4, and Xbox One.