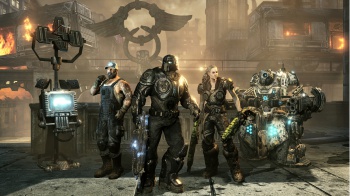 Day-one and on-disk DLC is an oft debated topic here in Internetland, with many gamers assuming, perhaps incorrectly, that content is being cut out of a game’s final release so it can be shilled separately. That’s now how it works, apparently, at least not according to Rod Fergusson, Director of Production at Epic games.

“What people need to understand is that extra content is something that you have to plan,” said Fergusson, talking to Game Informer Magazine. “You don’t just lift up a rock and say, ‘oh shit, there’s new levels!’,” added Gears of War lead designer Cliff Bleszinski.

Day-one DLC is often developed in tandem with the base game, but is usually budgeted separately. “There are people who think that the first day of DLC development is the day after you launched,” said Fergusson. “That’s not the way it works. A lot of it is that you have to prepare and plan and manage your resources and your people and everything to allow for that.”

Fergusson went on to argue that DLC, and presumably he means good DLC rather than the largely inconsequential stuff we’ve seen so far, is a preferable alternative to gated multiplayer systems, like EA’s controversial Online Pass program. A carrot rather than a stick, if you will. “It’s less about shipping what’s left over. It’s not about, ‘Oh, we had this map left over’… it’s keeping the disc in the tray,” he said. “In a used game culture that you have to actively fight against, I think DLC is one of the ways that you do that.”

Used game sales, a long standing part of the industry, seems to have replaced piracy as the industry boogeyman of choice, with numerous developers blaming them for poor, or lower than expected, game sales in recent years.

There is rather a lot of DLC planned for Gears of War 3.

Cloudy With a Chance of Galactus