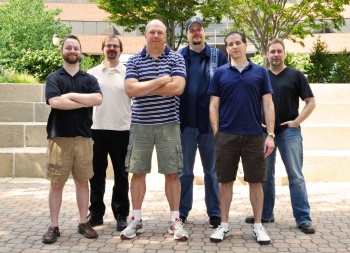 The studio based in Maryland has had a long history. Formed by Brian Reynolds – creator of Civ 2 and Alpha Centauri at Firaxis – before he left for greener pastures at Zynga. Lead designer of Oblivion Ken Rolston joined the team to make an RPG, but THQ was going to close the studio. Curt Schilling and 38 Studios came to the rescue and the team shifted to make Kingdoms of Amalur: Reckoning … and we all know how that turned out. This summer, Epic Games swooped in to hire some of the members of the team to capitalize on the successful Infinity Blade franchise on iOS. Today, Epic Games announced the formation of Impossible Studios with five previous Big Huge employees at the helm. The new studio will be based in Huntsville, Maryland, and begin work on a new game called Infinity Blade: Dungeons.

“Epic Games has truly embraced this stellar collection of developers who were displaced by the closing of Big Huge Games,” said the head of the new Impossible Studios, Sean Dunn. “They have looked after us with complete care, giving us all the tools and resources we need to make a lot of gamers happy.”

Game designers at the Cary, North Carolina headquarters of Epic Games conceived the concept for Dungeons, and tasked Impossible with making it in collaboration with Chair Interactive, who made the first Infinity Blade.

“We were so glad we could help keep this great team together, and we’re lucky to have them,” said Michael Capps, President of Epic Games. “At the time, I said that finding a full team of superstars was ‘impossible’ and apparently the name stuck! Pairing the imagination and experience of Impossible with Epic’s technology, IP and resources makes for a business greater than the sum of its parts.”

Epic plans for Infinity Blade: Dungeons to be completed and available on iOS by the end of 2012. Sound impossible? Well, that’s a job for Impossible Studios!

Rumor: Next Plants vs. Zombies Inspired by Team Fortress 2