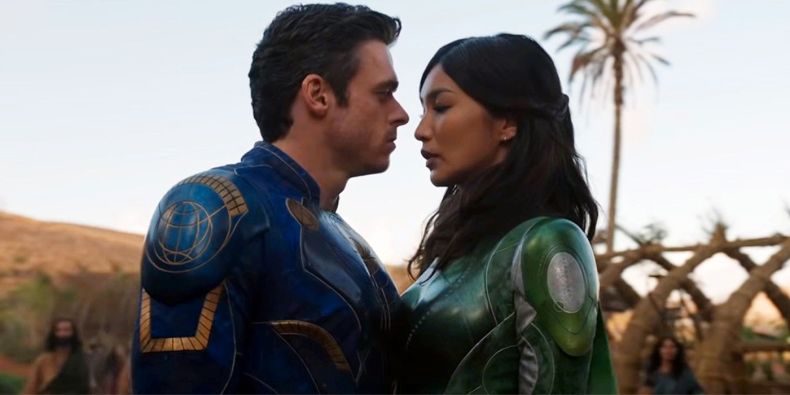 Sex. It is evidently something that superheroes in the Marvel Cinematic Universe (MCU) do not do. At least, that was the assumption one could make if you watched the first 25 films, as none of them contain any of it. I mean, people must have had sex to be born and there are a few relationships hinted at, but no one really has sex. Enter Eternals, the first MCU film to have a sex scene, and, according to director Chloé Zhao, it pretty much wasn’t a big deal.

“When we put it together, we showed people at Disney, and they really loved it,” she said. “It was beautiful. And there was no discussion of taking it out.”

The scene comes between two of the Eternals, Sersi (Gemma Chan) and Ikaris (Richard Madden), who fall in love during the Babylonian Empire and consummate their relationship right there and then. Although, the sex scene was actually in Marvel’s treatment from the get-go, even before Zhao had signed on, so this isn’t some brash indie film director coming in and pushing it forward, but a conscious direction that Marvel wanted to take the film in. Considering reviews for Eternals say that it stands apart from the rest of the MCU (for better and worse), it makes sense that they’d be more open to sex and sexy good times on screen.

“You can’t tell a mature love story if you’re not gonna do some kind of…” Zhao told Variety, trailing off. “It’s lovely to see two people show physical affection for each other — a kiss, make love.”

Does this mean we’ll get more sex in our superhero movies or at least some heavy kissing? It’s not clear. Even R-rated superhero films sometimes steer away from their heroes getting hot and heavy. Maybe it’s because there is still a feeling that these kinds of movies are made for kids and adults, especially when they’re in the MCU, but we’ll have to wait and see if we finally get to see what happens when Hulk orgasms.