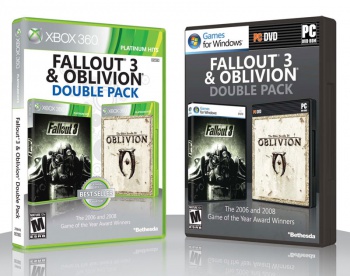 Do you love sprawling first-person RPGs? If you do, then Bethesda has a bundle that you’re going to want to check out.

Now that The Elder Scrolls IV: Oblivion and Fallout 3 are finishing out their retail life cycles, Bethesda is joining the two together as a brand new double pack. If you’ve been meaning to pick up both of these RPGs, but haven’t yet, then you’ll definitely want to check it out.

The pack is due out on April 3rd here in North America. According to Bethesda, the pack will be available for both Xbox 360 ($29.99) and PC ($19.99). According to Joystiq, the standard version of each game will be included in the pack, meaning you’ll have to purchase DLC separately.

Meanwhile Pete Hines spoke to Joystiq and said Bethesda isn’t allowed to release the pack for the PlayStation 3. “We will continue to work to try to change that, but at present it is still not approved. We would like to release a PS3 version [as] well.”