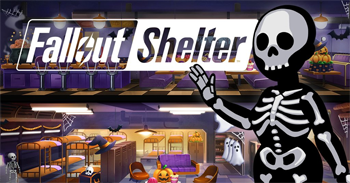 The vault has been spookified.

Bethesda has updated Fallout Shelter to celebrate the season of the spirit. Players who run the game now on iOS or Android will discover that their Dwellers have decorated the vault for Halloween, putting new furniture, jack-o-lanterns, and sheet ghosts into the living quarters.

It’s unclear what (if anything) else has changed with the update. The most recent patch notes for the iOS version cover the previous update made last week, which added a Survival mode along with several fixes and gameplay improvements. The promotional image released on Twitter (seen above) to accompany the announcement features a Skeleton costume, though this item also started appearing after the prior update.

I’ve been playing Fallout Shelter daily since it first released, though I’m not really sure why. I long ago passed the point at which balancing the needs of the vault resembled a challenge, yet I’m loathe to start all over again just to experience the added difficulty of Survival mode.

Yet, every day, I keep coming back. And, if that Elf Costume being dragged back to Vault 722 by one of my dwellers as I type this is any indication, it seems as though Bethesda plans to keep coming back to it too.