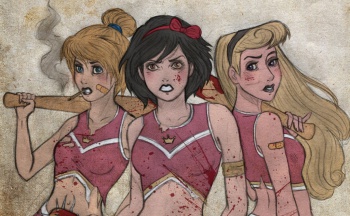 See Ariel, Rapunzel, and other Disney princes and princesses reimagined as survivors of the zombie apocalypse.

Disney movies have a lot of similiar thematic elements: princesses, heroes, evil villains, catchy songs. One thing movies like The Little Mermaid and Frozen lack, however, is zombies. Thankfully, one talented Deviantart user has remedied this with an artistic interpretation of classic Disney characters, The Walking Dead-style.

The Walking Disney features characters like The Little Mermaid‘s Ariel and Eric, Pocahontas (complete with her own limbless undead fiend), and Brave‘s Merida, just to name a few. They’re all courtesy of Deviantart artist Kasumi-Sensei, without whom we might never know how these characters would react to the zombie apocalypse.

It’s hard to choose a favorite in this bunch, but I’m leaning towards Merida. Then again, Tiana and Pocahontas are also looking pretty badass; I’d want them all on my side when the undead rise.

Why Tina of Bob’s Burgers Can’t Be Ignored