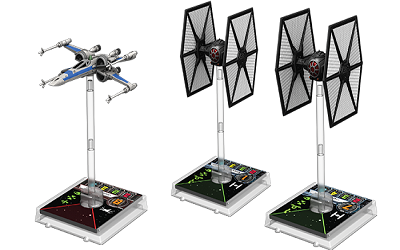 You may recall, back in August, when The Escapist reported on leaked photos revealing what looked to be a new Force Awakens edition of Fantasy Flight’s X-Wing miniatures game. While the images in question looked pretty danged convincing, Fantasy Flight, at the time, offered no confirmation as to whether or not it was the real deal. In a recent announcement however, the publisher has officially unveiled the new Core Set complete with Episode VII units, cards and more.

As hinted in the previous leak, the new starter set will swap out the older era X-Wing and TIE Fighters for the newer versions that will feature in The Force Awakens. The difference between the units will be more than visual. While they’ve been designed to be similar to their Empire-era counterparts, they’ll have their own unique stats, abilities and customization options. The T-70 X-Wing, for instance, will be able to perform the unique Tallon Roll maneuver and take advantage of new customization and pilot cards including BB-8 and Po Dameron. Fantasy Flight is also treating the Resistance and First Order fighters as extensions of the Rebellion and Empire, making them completely compatible with existing squadrons.

The only downside at the moment is that the Force Awakens fighters are only being sold in the new Core Set and aren’t available separately. In other words, if you want them you’ll have to fork over $40. That being the case, we’re willing to bet that, for some die hard X-Wing fans, the price tag might be worth it. Check out the new Force Awakens units for yourself and let us know what you think.