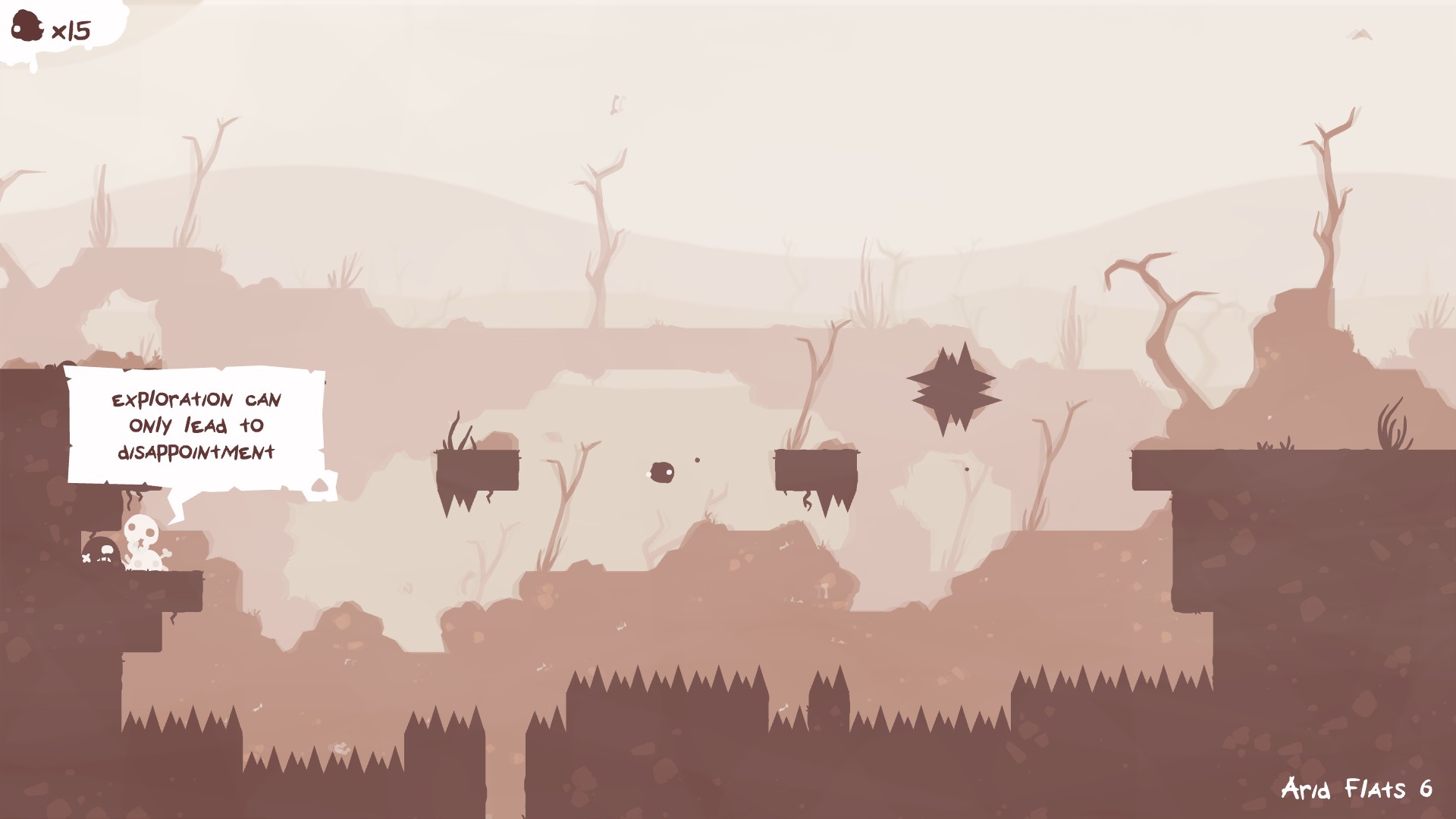 Find every Tumor, Mega Tumor, and secret Cartridge collectible in the second area of The End Is Nigh. We’ve got all the locations for the Arid Flats listed below.

The first area of The End Is Nigh is a breeze, but things start to get kind of tricky in the Arid Flats. Like The End, the Arid Flats features 20 separate stages, 7 secret paths with Mega Tumors, 1 Cartridge, and 1 key. The key, just like before, appears at the end of the “key” path — you won’t be able to get a key until the near-end of the game, anyway.

Below, find locations for each and every particular collectible — the name of the level you’ll find it, and details to help you grab it.

There are 20 Tumors, 7 Mega Tumors, and 1 Cartridge in every area — for a total of 55 Tumors if you collect them all.

Cartridge #2: Arid Flats 17 – Start from the right side (end) and jump across and to the left side with the center spring. A second spring will appear, giving you access to the upper secret area.

Secret #3: Arid Flats 6 – Drop into the narrow hole in the spikes at the bottom of the level. There’s only one tiny spot, so it should be obvious.

Secret #4: Arid Flats 10 – Trigger the floating spring on the left side when you reach the right side of this level. Rush back to the spring and use it to reach the small high ledge in the upper-left corner. Keep climbing to find a secret area path.

Secret #5: Arid Flats 12 – Jump onto the handhold on the upper-left of the level (after riding the rotating platforms) to reveal the key door.

Secret #6: Arid Flats 14 – Use the skull hopper to get enough height so that you can buttstomp the cracked floor and reveal a hidden area.

Secret #7: Arid Flats 20 – Ride the left pillar platform’s lower handhold, then drop to reach the handhold in the lower-left corner of the level. Hop up into the secret path.

Arid Flats 1: Just stand and wait on the tallest platform. It will appear from the right and float by.

Arid Flats 2: Climb the handholds on the ledge on the upper-right to hop and grab the floating tumor.

Arid Flats 4: Hop onto the second platform to cause it to fall. A single tiny block will also drop — use it to ride down and jump to get the tumor floating beneath the third platform.

Arid Flats 5: Easy, just jump across the spiky bottom-left corner. Land on the only non-spike square to safely get it.

Arid Flats 6: When the two moving-platforms meet in the center, drop to collect it.

Arid Flats 7: Just reach the exit like you normally would, then wait for the revolving square to move to the upper-left corner, so you can jump and grab the floating tumor and land safely.

Arid Flats 8: Complete the stage, then return so that you appear on the right side of the level. Get back to the left side to see the tumor appear.

Arid Flats 9: Floats in the upper-center of the level. Just time your jumps and use the spring to reach it.

Arid Flats 10: Like in Level 8, get to the right side to trigger a spring to float up on the left side. Backtrack (or start from the end of the level) and use the spring to reach the floating tumor.

Arid Flats 12: Found floating next to a spike enemy in the upper-left of the level. Instead of completing the level, ride the rotating platform left to grab this collectible.

Arid Flats 13: Behind one of the jump-height spike balls that’s moving left across the screen. Meet it about halfway and jump to reach it.

Arid Flats 15: Very tough. Spot the tumor floating in the center of the level, surrounded by ceiling spikes. Once again, use the skull to bounce up and grab it, but it requires precise timing.

Arid Flats 16: In the narrow area on the upper-right corner of the level. Use the last vertically-moving block (right side) to jump to the handhold ledge.

Arid Flats 17: Very tricky. Drop down onto the flat (no spring) area and hop left. When you touch the lower floor, it will begin to crumble. Quickly collect the tumor and jump to the spring.

Arid Flats 18: Another tumor appears between floating spikes. Ride the moving platform and look up for the tumor — you’ll have to jump between two spikes and back out of their “pocket” to avoid a spiked end.

Arid Flats 19: When riding the rotating square, drop off the left ledge instead of the right at the end of the level. That way you’ll be able to access the tiny path to the center of the square with this tumor.

Arid Flats 20: The last tumor falls at around the center of the level. Just jump (slightly) from the moving platforms with handholds to get it.

That covers all the Tumors, Mega Tumors, and the Cartridge for Arid Flats. Next, let’s take a dip in the Overflow.