Duelyst is a online collectible card game with a twist. It’s the newest kid on the block, and it’s poised to take on Hearthstone in a big way.

What makes Duelyst so special? Unlike Magic: The Gathering Online and Hearthstone, which consist purely of digital playing cards, Duelyst is a turn-based strategy game as much as it is a card game. You could call it a collectible card game with strategy elements, or a strategy game with card-playing elements. I think it’s both.

Like those other games, you have a small variety of classes (or factions, in Duelyst‘s case) to choose from. Each faction is lead by a general and offers a specialized assortment of cards. Neutral units complement and fill out the rest of your deck.

The objective of the game is straightforward: kill your opponent’s general before they kill yours. You summon battle units, cast spells, and equip artifacts on your general with cards-using everything at your disposal to reduce the enemy general’s health from 25 to 0. Battles take place on a square grid, playing out as a turn-based strategy game. Think Heroes of Might and Magic meets Hearthstone and you’ll understand the concept of Duelyst. 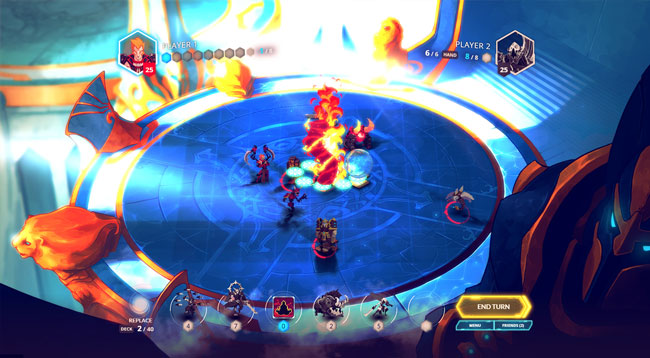 Graced with fancy pixel art sprites to depict every unit in the game, Duelyst caught my attention the instant I saw it. The aesthetic sets it apart from just about everything else, and boy does it look good. That alone shouldn’t be enough to convince you to play, so here are five real reasons to get into Duelyst, especially if you’re a fan of other collectible card games.

The biggest, and arguably most important difference between Duelyst and other collectible card games, including Hearthstone, is that it places a lower emphasis on random chance and luck, or RNG. While it’s still important to have good cards in your hand, the ability to mulligan (or replace) a single card each round means you’ll run into dead-end situations a lot less often. You can exercise much more control over your games. You’re not guaranteed to lose when you draw a poor starting hand.

It Has More Depth

Having the best hand in the game won’t make you win if you’re no good at the game’s tactical layer. While any good collectible card game rewards players for skill, an understanding of the metagame (strategies that are trending at the moment) and the foresight to predict the enemy’s moves, the cards they may potentially have in their decks, etc., Duelyst takes it a step further by having every battle play out on a grid field as actual units. It’s more than just playing cards-it’s a tactical game that requires you to think… well, tactically. You have to really consider the positioning of your own units, how to flank your opponents, and more. It’s a bit like chess.

In Duelyst, you can have a maximum of 3 copies of the same card-up from Hearthstone‘s limit of 2. In addition, you’re afforded a much larger deck (40 in Duelyst over Hearthstone‘s 30). With higher limits, you have more room to experiment with your deck. While this doesn’t eliminate the issue of “netdecking,” (the act of borrowing your deck from a popular streamer or website), truly skilled players have the opportunity to try out more builds.

Which brings me to my next point…

It’s Slightly Less Expensive
You might be inclined to think needing more cards to build a good deck costs more money and requires more time investment-and to an extent, that’s true. However, Duelyst attempts to offset the cost by providing players with a higher chance of getting rare cards, which makes up for the fact that you can hold multiple copies of powerful Legendary-tier cards.

Compared to Hearthstone, you get more gold for winning. Even if you don’t win, the daily quests don’t require you to win-they merely require your participation. With all the opportunities to earn gold, you can buy new booster packs at a higher rate and grow your selection of cards.

There’s No Better Time to Play

Duelyst is a game that’s going to get a lot bigger in the months to come. As more popular streamers pick up on the game and word-of-mouth spreads news of everything Duelyst has to offer, the scene will become more competitive. As with every new game, it has a young community that’s just a whole lot nicer to be around than the ones surrounding more popular games. That may change in the future, but for the time being, Duelyst‘s community is in a good place.

There’s no better time than now to get into the game, if only to tell people you liked Duelyst before it was cool.