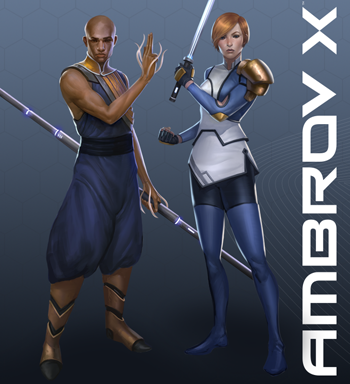 After receiving death threats, Jennifer Hepler moves on to work on a RPG that she says looks like a “Mass Effect rip-off.”

Former BioWare writer Jennifer Hepler worked on character-driven, choice-based RPGs such as Mass Effect and Dragon Age. In her leave, she has chosen the independent game Ambrov X as her next project, a science fiction RPG with a system similar to the RPGs for which she’s written in the past. However, as a part of the game’s Kickstarter campaign, Hepler won’t sign on to work on the game until it reaches independent game developer Loreful’s $750,000 stretch goal.

Ambrov X focuses on a symbiotic relationship with the player’s partner in the game. Player choice causes changes in the dynamic between the two main characters, a central facet of the game. The science fiction RPG takes place in Sime~Gen universe. Developed in the 1960s, this universe involves humanity being divided into two subspecies that coexist to survive.

The game will be developed episodically. Loreful plans to use fan feedback early on to tailor characters to players’ interests. All five episodes will be available for $25. Each episode will be three to five hours long.

Hepler wrote on the Kickstarter page that she plans to continue make games that reach out past the “straight white male” demographic. “Players can play any gender and romance any gender they want. Because who am I to come into your living room and tell you how to play?”

Ambrov X‘s funding period ends Oct. 5. The game will be released in the second quarter of 2015.

I Have No Mouth and I Must Scream