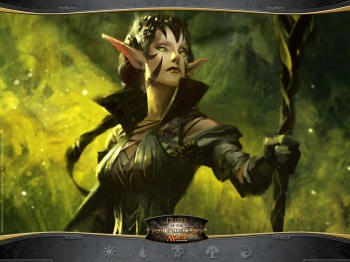 Police have recovered Magic: The Gathering cards worth tens of thousands of dollars, after a selection of the boosted boosters were discovered up for sale at a tournament.

Donald J. Henry, a former employee at Wizards of the Coast, the company behind Dungeons & Dragons and Magic: The Gathering, is facing felony charges after admitting to the theft of 200 rare Magic cards.

Wizards of the Coast noticed Henry’s shady dealings after another employee noticed a vendor at a Magic tournament in Portland, Oregon, trying to sell the dozens of rare, promotional cards. This employee was able to confirm that the vendor was connected to Henry, who was fired in September after an investigation was launched. It didn’t take long for Wizards to discover that Henry had made seventy trips to the storage locker where the cards were kept, far more visits than his job required.

Wizards of the Coast staff met with the vendor and were able to recover 1,753 cards with a value of just under $45,000. The total value of the stolen goods is thought to be much higher however, as the vendor had already sold some of the cards. Following his arrest, Henry admitted to stealing 200 of the cards, but prosecutors are alleging that he actually stole all of them.

As nefarious schemes go, this one ain’t great, especially if the tournament in question was the Wizards of the Coast-backed Portland leg of the Magic: The Gathering Grand Prix. It’s possible, although seemingly unlikely, that Henry’s vendor acquaintance didn’t know the cards were stolen, and so didn’t think anything of bringing them to the tournament, but if that is the case, it just shows how shaky Henry’s plan was.

Kotick: Treyarch “Didn’t Get Their Due” for Making Call of Duty a Success