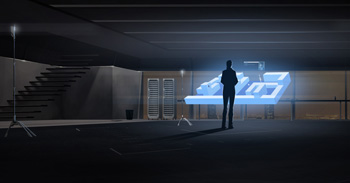 Developer Mike Bithell has announced an expansion to his stealth action title Volume, which will release first on PlayStation 4 next year. Along with a new 30 mission campaign, Volume: Coda will offer support for the PlayStation VR headset. All of the game’s content will be playable using PlayStation VR, including the original campaign, the expansion, and all user-generated levels.

The campaign in Coda will continue the story of Volume following the events of the core campaign, introducing new characters and a new VR setting. The expansion will be available when PlayStation VR launches next year.

Along with the announcement of Coda, Bithell provided information on another update to the game now available. Noting that, “the original design of Volume was heavily sided to speedrunners,” the new Checkpoints Update introduces new modes and leaderboards for stealth purists.

Finally, the developer addressed questions about the release of Volume for PS Vita, stating that the game is still bound for the platform and remains a cross buy title. No release date was provided, though Bithell noted, “it doesn’t look like it’ll be too much of a wait.”