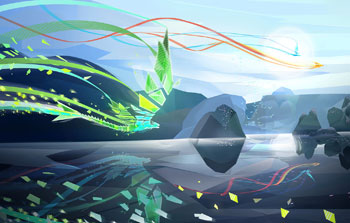 At Midnight Resistance, Owen Grieve animatedly challenges the idea that public criticism of game design is tantamount to censorship of game developers.

You may have heard of this term “ludonarrative dissonance,” which most writers define as being when a game’s story is contradicted by its mechanics. The origin of the term actually uses “narrative” in a broader sense, like themes or ideology. So it’d be more accurate to say that “ludonarrative dissonance” is when a game’s mechanics teach a lesson opposite that of its themes.

It so happens that this week’s Errant Signal video (by Chris Franklin) expertly captures the real meaning of ludonarrative dissonance as it applies to the recently released Sony exclusive Entwined: when a game’s “big picture” themes about love and freedom are at odds with its mechanics, which keep the characters apart.

I think there is a push among, I guess, critical consumers of games towards this politics of representation, of wanting images that reflect who we are and that’s important and that’s really valuable, but I think that the risk there is that we come to believe that if we just have perfect representation, everything will be fine and that’s the end goal. It reminds me of the ways that the politics of inclusion manifest in other spaces, so things like the acronym LGBTQ-whatever, it’s this idea that if we just get the right combination of letters, everyone will be included. And you can’t possibly, that’s a fantasy. And in ways, that’s one of the promises of or impetuses behind words like queer, it’s this word that in ways encompasses things but also leaves a lot of room. I think abstraction [in game design] does the same thing.

Paste’s Maddy Myers offers the most compelling argument yet that written journalism and criticism is a dying medium, something she suggests is no better exemplified than through Youtube celebrity PewDiePie.

The Ugly Americans: The Addams Family and The Munsters